Even super-sexy Sofia Vergara has a bit of boob-and-body envy now and again. The Modern Family actress, whose shape is lusted after by men and women alike, surprisingly wouldn’t mind trading top halves with one model — at least some of the time. 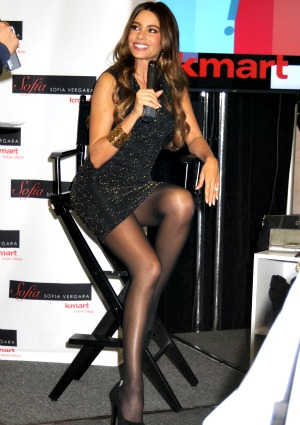 Sofia Vergara’s breast size is both a blessing and a curse. Sure, ‘the girls’ have helped get attention here and there, but going braless? Forget about it!

Speaking of her beloved breasts, Sofia Vergara told Lucky magazine for its November issue, “I know [my breasts] have opened doors for me — let’s be real.”

“But I so hate when I see Gisele [Bundchen], and she is wearing a tiny, little tank top with no bra, like, ‘Oh, I just threw this on, I look so cute.’ If I wore that, I would look like I was pregnant, or a fat stripper.”

Doubtful, but all the same, the boob envy is a little understandable. There’s a time and a place for every body — and breast size!

One person who it’s safe to assume loves every inch of Sofia Vergara’s curves? Nick Loeb, who it seems holds the power in deciding whether or not the couple will try for a child together!

The Colombian-born Modern Family star, mom of 20-year-old son Manolo from a previous relationship, said of having more children, “[Nick Loeb] is younger than me, 37, and he never had them. So if he wants one, maybe I will…”

As for why the pair are a match made in heaven, she commented, “Because we are f***ing professionals at doing nothing. We like to sit around on the beach and drink wine and talk s**t.”

Also “s**t,” as she so eloquently put it? Those who wax poetic about age. “Turning 40 is horrible,” Sofia Vergara said, adding bluntly, “People that say it isn’t are full of sh*t.”

All the same, 40 sure is looking good on her — forget the boobs and check out those gams! Vergara is giving Ms. Bundchen a run for her money.