Taylor Swift promises to make it up to the students of a school targeted by web trolls. 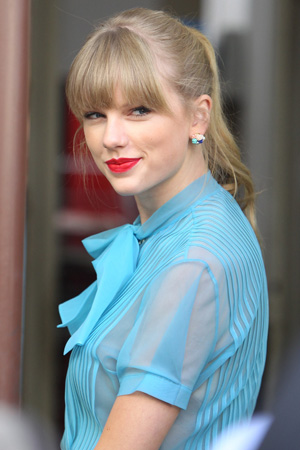 4Chan members got a good laugh last month when they managed to “help” a Boston, Massachusetts, school for deaf students win a contest to bring Taylor Swift to the school. However, Swift and the students are getting the last laugh.

It all started when Papa John’s and textbook rental company Chegg started the contest to give one deserving school a concert from the Conor Kennedy-loving singer. The trolls skewed the votes to put the Horace Mann School for the Deaf on top.

Ultimately, Papa John’s and Chegg disqualified the school because of 4Chan’s nefarious motives. However, the two companies decided to turn a wrong into a right by giving the school $20,000 for its music program. Cover Girl, Hallmark and Swift followed suit by giving another $10K each.

Swift also promised to give all the students tickets to her next Boston concert.

Taylor Swift sings about falling in love, the next time >>

“Are we the winner? Absolutely,” principal Jeremiah Ford told The Boston Globe.

“We’re glad this story has a happy ending, but it seriously breaks our hearts when people are so cruel. Luckily, not everyone is an awful human being,” Ford said.

Swift has gained a bit of a reputation for being a soft-hearted celebrity.

The 22-year-old has done everything from inviting a sick high schooler to the Academy of Country Music Awards to writing a song in honor of a toddler’s fight with cancer. She debuted the song “Ronan” at the Stand Up to Cancer telethon last month.

Swift ended the song, written for the late 3-year-old Ronan Thompson, with a few tears.

The boy’s parents were obviously touched by her kind gesture.

“Thank you, Taylor, for seeing the beauty in my child and falling in love with him so much so that you wrote him a song,” Maya Thompson wrote on her blog. “You are simply amazing. I know he is so proud of you and your heart.”

Moral of the story? Don’t be a bunch of d-bags, 4Chan trolls.