NBC is happy with its new schedule. Just after getting the news that it had won its first premiere week since 2003, it green-lighted three of its new shows for full seasons. 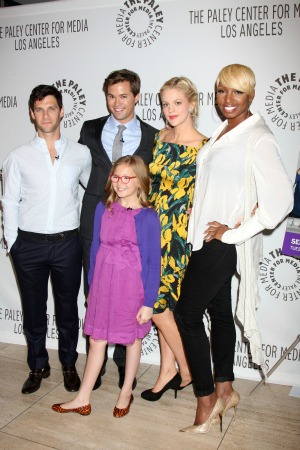 The Voice may be good luck for the new shows following it this season. Today, all three of those shows — Revolution, Go On and The New Normal — were picked up for full seasons.

“Revolution launched as the top-rated drama premiere on any network in three years…,” said Andrea Morabito with Broadcasting & Cable. The show has been averaging 9.8 million viewers per show on average since it premiered.

Go On, which stars Friends actor Matthew Perry, has also done well, coming after Tuesday night’s The Voice. Go On averages 8.6 million viewers an episode, “tying ABC’s The Neighbors as the top-rated comedy of the fall,” said Morabito. NBC also picked up the new series The New Normal, although that show has fewer viewers than the other two shows. According to Morabito, The New Normal has been averaging 6 million viewers an episode. That is 74 percent of the viewership of Go On, the show that is on before it.

The three series, as well as Sunday Night Football and The Voice, helped NBC win its first premiere week in nine years (for viewers 18–49). “According to Nielsen, [this is] the first time [NBC] has claimed that spot since 2003,” said Morabito. Fox came in second, with its series New Girl, The X Factor and The Simpsons (20 years later, still the network’s third–most watched show). CBS came in third for the week, with its top shows The Big Bang Theory, NCIS and 2 Broke Girls.

Out of all the networks, ABC is definitely on top in the awards categories, but that doesn’t necessarily translate to ratings. The network was in fourth place for the week, with its top shows being Modern Family and Grey’s Anatomy.

Sunday Night Football is by far the highest-rated show out of all of them. While The New Normal is considered competition for the veteran series Modern Family, the latter still has far more people watching it.