666 Park Avenue is getting a new resident. The View‘s Whoopi Goldberg is visiting ABC’s hottest new address. The host and actress has landed a guest spot on the supernatural drama.

Related story Whoopi Goldberg's Holocaust Comments Were Shut Down as Misinformation Should Be — So, Who's Next? 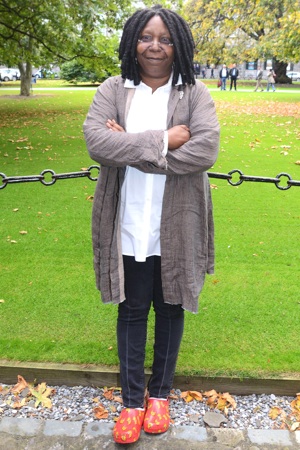 The wait is over. Last Sunday, ABC premiered the highly anticipated drama 666 Park Avenue. Following Revenge and Once Upon a Time, it completes three hours of must-see TV.

The devilish series recently caught the eye of the Academy Award-winning actress.

According to EW, Whoopi Goldberg is checking in to The Drake. She’ll moonlight from her day job as moderator of The View to creep out the building’s newest tenants. She’ll play a character named Maris Elder, who’s described as “a mysterious shut-in and longtime resident of the Drake.”

Goldberg will mix it up with Rachael Taylor’s Jane as she tries to understand the apartment’s supernatural pull. They’ll use hypnosis to see if Jane’s hiding anything below the surface.

This isn’t the first time Goldberg has appeared on ABC primetime. In the past, she guest-starred on the sitcom The Middle, and also hopped over to Fox for a quick stint on Glee. The actress is everywhere! As for 666 Park Avenue, she’ll be an interesting addition to the canvas. She’s slated to appear in Episode 9, which will air sometime in December.

Does ABC have another hit on its hands with 666 Park Avenue? >>

666 Park Avenue’s debut episode pulled 7 million viewers. That was slightly fewer than its predecessors Revenge (9.5 million) and Once Upon a Time (11 million). There’s some room for improvement, but pilot episodes aren’t the be-all and end-all.