It’s raining body parts in Washington, D.C., and our trusty team of human remain lovers are on the case. But things get really messy when the dead guy shows up… alive. 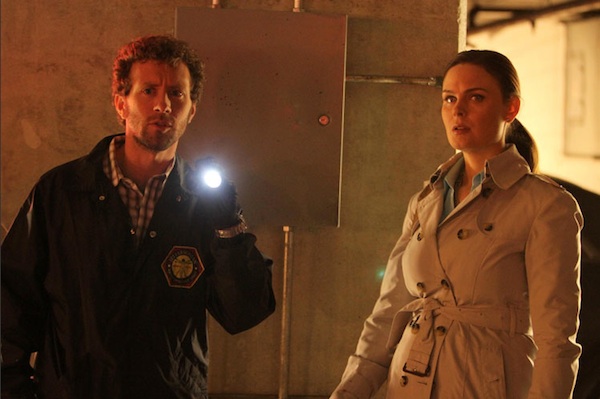 Is it just me or has Bones been upping the gross-out factor lately? This week, an unsuspecting pedestrian gets blown to bits in a parking garage by a bomb in a Big Gulp. And I mean to bits! Legs were flying, clumps of muscle were strewn about, there was a slab of skin they called a nose and, of course, the large intestine that fell on Hodgins’ (TJ Thyne) face. Maybe watch this episode before you eat dinner.

Back at the lab, Dr. Brennan (Emily Deschanel) and her team discover the victim is Robert Carlson and someone from the FBI needs to alert his widowed wife. However, Agent Booth (David Boreanaz) has been called away to give a department budget pitch. If he’s successful, he could be trading in his chasing-bad-guy-shoes for a promotion. With a daughter to provide for and a wealthy wife to compete with, the extra cash may be worth being chained to a desk.

While Booth crunches numbers, Sweets (John Francis Daley) is sent to inform the widow, but he won’t be doing it alone. There’s a new agent in town, Special Agent Olivia Sparling (Danielle Panabaker), and she is not easy to like. She doesn’t respect Sweets and certainly doesn’t like working with a shrink. I can’t wrap my head around it, but Sweets seems to find her abrasive and condescending attitude charming. Even though she’s a brat and he has a serious girlfriend, all he seems to care about is impressing the cute new agent. The mismatched pair attempt to convince Roger’s wife her husband is dead, but that’s hard to do when he shows up on the doorstep… alive. 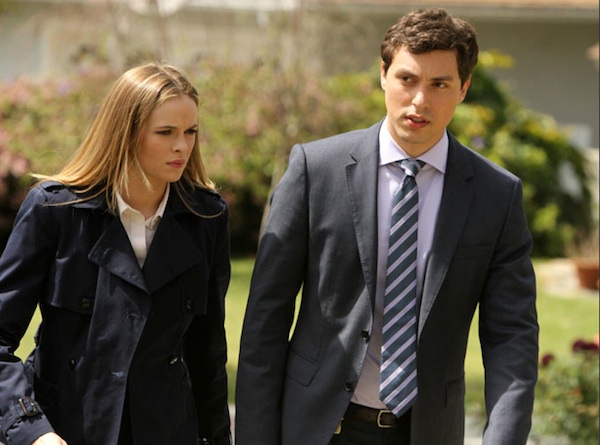 Here’s the thing about Roger. He has a long lost identical twin, Jerry, and that’s the guy whose body parts now decorate the walls of the parking garage. It turns out that identical twins who have never even met are often drawn to the same interests, people, and even religions (at least that’s what Sweets says). So, it’s not too surprising when they discover Jerry and Roger were actually in the same hotel at the same time to attend the same New Age conference (which is really a scam trying to take people’s money).

Sweets’ mad shrink skills (which do wind up impressing Agent Sparling, even though he has a girlfriend) lead the team to discover Roger’s wife hired a hit man to kill him because he was about to give all of their money to the New Age cult. Roger’s life is still in danger. Booth bails on the budget meeting to go nab the bad guy and basically forfeits his promotion.

In a standoff outside of an ATM, Sparling accidentally shoots Sweets, but the Supersized Soda Bomber does get caught in process. Lying in the gurney, Sweets tells Sparling he has a thing for her, but has a serious girlfriend. And then she kisses him, even though he has a girlfriend! I’m not keen on the boyfriend-stealing Agent Sparling, but at least I can rest easy knowing Booth will continue to keep D.C.’s streets clean from soda bombers and other creative murders.

Check out the gross stuff you missed in this “The Gunk in the Garage” clip. Nasty!!!