Arnold Schwarzenegger gay? Rumors the former bodybuilder is romantically interested in men have never been front-page news here in the States. But when he was growing up in Austria, his parents thought otherwise — and acted upon their fears. 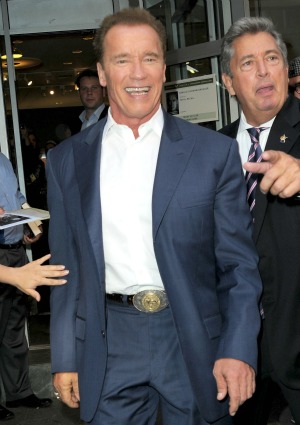 Arnold Schwarzenegger gay rumors may sound like nothing more than tabloid fluff, but while growing up, the man who would one day become both movie star and governor was just a boy beaten by his father.

Revealing that his parents both believed he might be gay because his bedroom walls were covered with posters of scantily clad body builders, Austria-born Arnold Schwarzenegger recalled during a 60 Minutes appearance the two tried to cure him in their own ways.

Speaking of his father Gustav, who was the local police chief, Arnold Schwarzenegger said “he ran after me with a belt and beat me.”

His mother, Aurelia, thankfully took a softer approach, though she still had it in her head something was “wrong” with her son and she could find a way to “cure” him.

Arnold Schwarzenegger describes the end of his marriage >>

In a joking tone, the now 65-year-old explained:

“I don’t know if mum thought I was gay, or if she just thought there was something off. And ‘let’s catch it early.’

“She asked the doctor, ‘Can you help me? I don’t know if there’s something wrong with my son because his wall is full of naked men.

“‘All of Arnold’s friends have pictures of girls above their bed. And Arnold has no girls.'”

Along with recalling that childhood experience, in his book Total Recall: My Unbelievably True Life Story Arnold Schwarzenegger has confessed to having had multiple affairs during his relationship with estranged wife Maria Shriver — all of which were with women.

Arnold Schwarzenegger’s tell-all book hit store shelves Monday. Will you be picking up a copy?