The actress and singer is working on an album and planning a wedding. But in case that’s not enough, she may have just signed on for a miniseries to air on both Lifetime and the History Channel. 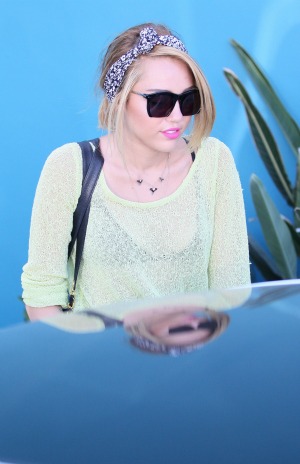 Miley Cyrus has done a lot already in her young career, and now it looks like she may be doing something new. According to MTV, the actress/singer may be in talks to play the Bonnie side of a Bonnie and Clyde story. The most interesting part may be that the project is being produced by both Lifetime and the History Channel, which are both AETN Networks channels.

The story would end up being a miniseries, similar to the Hatfield & McCoys miniseries that was nominated for multiple Emmy Awards this year. But this project would be aired on both History and Lifetime. The network also produced the Elizabeth Taylor biopic starring Lindsay Lohan that will air on Lifetime later this year. Cyrus has not responded to the rumors about the part, but she is reportedly meeting with directors. No names have been announced regarding the Clyde half of the story.

Miley Cyrus may have to search her schedule for some free time. On top of working on an album, she will make a cameo appearance on Two and a Half Men this season.

“She is set to play Missi, the daughter of one of Walden’s (Ashton Kutcher) friends,” said MTV. “In photos released last week, Cyrus seems to be doing her best to mix it up with the Men crew as she sports lots of short shorts and even climbs into bed with Walden wearing nothing more than skimpy lingerie.”

The newly engaged star said she wouldn’t be getting married until she finished her album. But it looks like she may be pushing that date back even later, as she keeps adding more and more projects to her plate. Her fiance, Liam Hemsworth, is also currently working on multiple projects, so it could be years before they finally tie the knot.