The Hunger Games has come full circle. After searching high and low, Lionsgate has found a writer for the next sequel, Mockingjay. The last installment of the film series is scheduled to hit theaters in 2014. 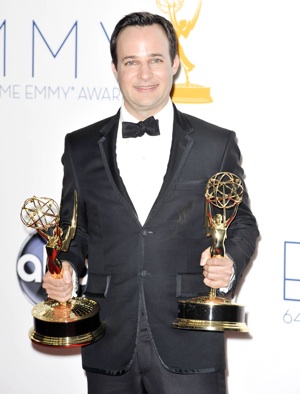 The Hunger Games trilogy is ready for box office domination. Following the success of the first film, Lionsgate quickly announced its sequel, Catching Fire, which is currently in production. Then today, the company confirmed a writer for its big-screen finale, Mockingjay.

Emmy award winner Danny Strong has been hired to adapt the final book for the studio. According to Variety, the film will take a cue from the Harry Potter and Twilight franchises by being a two-parter. Mockingjay part 1 is scheduled for a Nov. 21, 2014, release, while part 2 will open the following year (Nov. 20, 2015).

Hunger Games sequel to be shot
in IMAX >>

Strong is one of Hollywood’s most in-demand screenwriters. In 2008, he wrote the HBO film Recount, which seemed like a precursor to this year’s Game Change. The made-for-TV movie recently won five Primetime Emmys, including one for outstanding writing.

Strong also co-wrote Lee Daniels’ upcoming biopic The Butler, which features Forest Whitaker in the title role. One of the most anticipated films of 2013, it charts one man as he serves eight U.S. presidents (John F. Kennedy, Richard Nixon, Ronald Reagan, etc.).

Prior to The Hunger Games, Strong was tapped to adapt another best-selling novel. Sony brought him on to rewrite the script for The Lost Symbol, the follow-up to Dan Brown’s The Da Vinci Code and Angels & Demons. He’s clearly Hollywood’s new go-to guy.

Do you think Mockingjay is in good hands?