Ben Affleck’s shaggy hair was an awful monstrosity, according to his family. 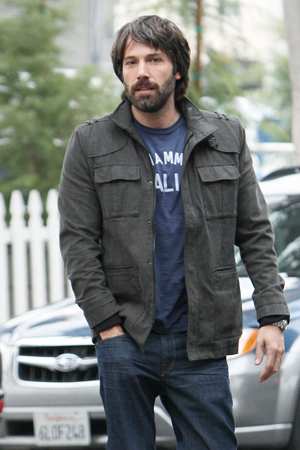 Ben Affleck horrified us last year when he showed up in public with a Justin Bieber-esque shaggy ‘do. Now we know it was for his upcoming film Argo, but we still don’t like it on him.

Turns out we’re not the only ones.

“My family unanimously hated the look,” he joked during a press conference for the new film. “My dad was like, ‘What kind of work would want you to look like that?'”

Ben Affleck and Hillary Clinton are working together >>

However, wife Jennifer Garner and daughters Seraphina and Violet were the ones who really, really hated the look.

“I kept trying to tell my littler kids [that this was for work],” Affleck added. But “they would say, ‘Why can’t you shave your… prickles? Shave your prickles!'”

He might be joking about the ‘do, but the plot in Argo is anything but a laughing matter. In the film, Affleck plays Tony Mendez, a CIA “exfiltration” expert who creates a dangerous plan to smuggle six American hostages out of Iran.

Affleck also directed the movie based on a true story. He told reporters that it was important to be accurate and fair when depicting the Iranian revolution.

“While I didn’t want to be didactic or indicate to the audience how they should feel, we did want to factually tell this story and how we had believed our support of the Shah was right in part because of his progressive stand on a lot of issues,” he said. “We looked the other way in terms of some of the political repression… some of the literal atrocities that took place.”