Kelly O’Connor McNees returns to 19th century America for her second novel, In Need of a Good Wife. This time, she focuses on women who went West to find husbands among the frontiersmen. 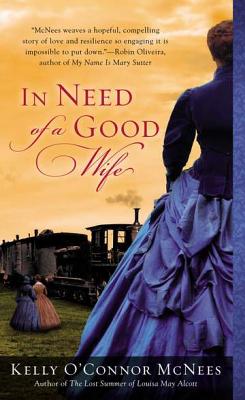 After the Civil War, men were in short supply in Eastern cities. So many of them had died during the war, and so many of the rest had gone West in search of a life of freedom on the frontier. Women were equally absent in many frontier towns; some men went West without wives, others had wives who died or decided to head back to civilization.

This geographical gap between the genders and attempts to remove it are at the center of Kelly O’Connor McNees’s novel In Need of a Good Wife.

About In Need of a Good Wife

Everything Clara Bixby ever had is now gone. Her parents have passed away, her father’s bar was sold — and she has just lost her job there — and her husband ran away with another woman after they lost their baby.

In search of something else, Clara hears about Destination, Nebraska, a town out West that is populated almost entirely by bachelors. After corresponding with the town’s mayor, Clara decides to work as a matchmaker for Destination’s bachelors and the unmarried women of New York City.

In addition to Clara, In Need of a Good Wife focuses on Destination’s mayor, as well as two of the women heading West with Clara. Elsa is a devout German immigrant who wants to escape the difficult life of a laundress to one of New York’s richest and most demanding women. Rowena’s reasons for signing up with Clara are a bit more complicated, however.

Like Clara, Rowena has lost both her husband and, effectively, her father. Also like Clara, her losses have left her with little to her name; she was once a rich society woman, but she can now barely pay her bills. Too embarrassed by her penury to remarry in New York, Rowena hopes to find a new life in Nebraska that will allow her to support her senile and institutionalized father.

It is the interactions between these women, as much or more as their interactions with the men in their lives, that drive the plot of In Need of a Good Wife. The characters are rich and complicated, making their interactions incredibly realistic and transporting readers to the 19th century American frontier.