Years ago, women avoided the topic of breast cancer. Unfortunately, their silence proved to be deadly. Hollywood has given its two cents by using some of TV’s most-beloved characters in our war on the disease. 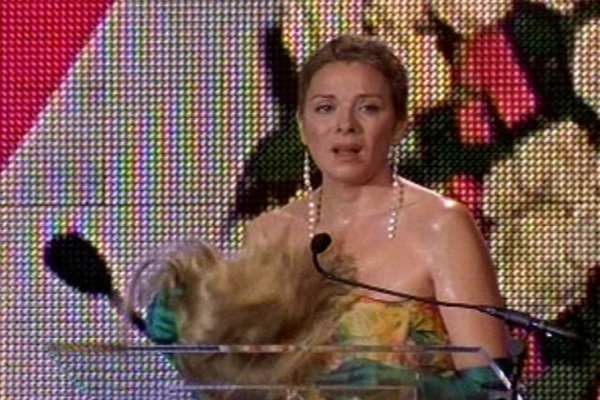 Edith Bunker — All in the Family

Norman Lear sitcoms are known for being revolutionary. It’s no surprise that in 1973, he used All in the Family to break the breast cancer barrier. In a special Christmas-themed episode, Edith Bunker (Jean Stapleton) was hiding a dark secret. After going through the motions of denial and fear, she blurted out to her daughter: “I got a lump in my breast!” It was one of the first times the topic was ever discussed on national television.

Breast cancer can happen to anybody, even a confident vixen like Samantha Jones (Kim Cattrall). During a consult for a breast augmentation, Samantha’s doctor found a lump. She had moments of sadness and anger, but faced the disease head-on. Besides having her gal pals by her side, Samantha’s supermodel boyfriend made a shocking gesture of solidarity. In one of the show’s most pivotal scenes, he went bald for the cause.

In the early ’90s, Beverly Hills 90210 was the most watched show among teens. That’s why it was the perfect vehicle to spread the word. Breast cancer has a stigma of only affecting older women, when it actually touches all ages. While the rest of the characters were cramming for their SATs, Brenda Walsh (Shannen Doherty) was dealing with a cancer scare. She found a lump in her breast, but thanks to early detection, walked away with a clean bill of health.

The last thing any tough, independent woman wants to hear is, “You have breast cancer.” Therefore, when Mary Beth Lacey (Tyne Daly) received her diagnosis, denial was the name of the game. Lacey’s husband and her partner Christine tried to comfort her, but she wouldn’t have it. She was angry and hated feeling powerless. But over time she learned there’s nothing weak about fighting for your life.

Breast cancer is a topic soap operas have kept at the forefront. One show in particular — General Hospital — showed the generational aspect of the disease. Emily Bowen-Quartermaine’s (Natalia Livingston) biological mother Paige died from breast cancer, while her adoptive mother Monica survived it. As a young adult, Emily’s worst nightmare come true. She, too, was diagnosed with the disease. Initially, she hid it for months before finally breaking down and telling her family the truth.