Arnold Schwarzenegger comes clean about yet another affair — this one was with an actress, while he was dating and living with Maria Shriver. How much more public humiliation can his ex-wife take? 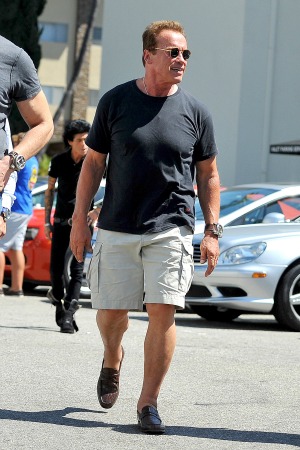 Well, if the admission about his affair with their housekeeper wasn’t enough for Maria Shriver, how about Arnold Schwarzenegger‘s affair with actress Brigitte Nielsen? The hits keep coming for the beleaguered ex-wife of the action star, as his interview with Leslie Stahl of 60 Minutes continues to top the weekend news.

Last year, with the release of her own autobiography, You Only Get One Life, Nielsen admitted to an “outrageous affair” with the former California governor while they were on set, shooting the 1985 film Red Sonja. Nielsen was not aware of the actor’s relationship with Shriver, but Schwarzenegger was living with the latter at the time.

The Danish actress wrote, “Maybe I wouldn’t have got into it if he said, ‘I’m going to marry Maria,’ and this is dead serious, but he didn’t, and our affair carried on. We wanted to try everything, and so we did. There were no restrictions, no promises, nothing, and it was a great time in my life.”

In his new book, Total Recall: My Unbelievably True Life Story, the action star says he believes the “fling” with Nielsen only made him want to marry Shriver more. Schwarzenegger is on a public-image rehabilitation blitz, with the 60 Minutes interview on Sunday and the release of his new book on Monday. While his memoir forces him to come clean on all of his indiscretions during his time with Shriver, it will be interesting to see if the public will be as forgiving as he might hope.

His former wife filed for divorce in July of this year, and she has not opted for any type of reconciliation with the actor. Schwarzenegger reveals he is lonely despite a busy schedule — when Maria left him, their children followed her out the door.

The 60 Minutes interview airs on CBS this Sunday at 7/6c, and Schwarzenegger’s new book will be available beginning Monday, Oct. 1.