If E.L. James’ husband is to be believed, Ryan Gosling is the front-runner to play the wealthy, handsome hunk. However, the author cleared up the confusion during an interview with Ryan Seacrest. 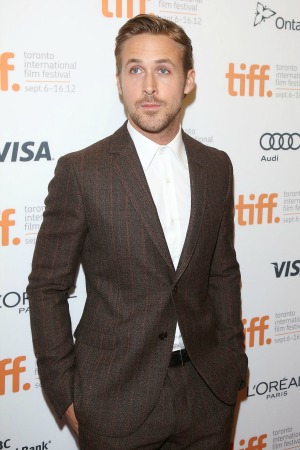 The hottest role up for grabs in Hollywood just got even hotter, thanks to a circulating rumor that Ryan Gosling might be playing Christian Grey in the upcoming film adaptation of Fifty Shades of Grey. It all started when the husband of author E.L. James was featured in the couple’s hometown paper as the inspiration for the main character. Underneath the article, the paper placed a photo of the hunky actor.

That’s when the rumors began to fly, as the media picked up on the story, thinking James’ husband, Niall Leonard, had the inside track on casting. As the bestselling author told Ryan Seacrest on his KIIS-FM show this week, “As usual, it’s all been misreported. No, my husband has not spilled the beans.”

Whether or not Gosling actually does get the role remains to be seen, as there are other celebrity names being bandied about Hollywood, including Matt Bomer, Jake Gyllenhaal, Christian Bale and Chris Pine. Most importantly, who does James want to see in the role of the dashing Grey?

Currently, she declines to reveal who is at the top of her list since “[It’s] far too early in the process.” However, when Vampire Diaries actor Ian Somerhalder was mentioned, she did say she was a big fan of the CW show. Does that put Somerhalder at the top of the list?

Well, probably not, as final casting is usually up to the studio. We will have to wait a bit longer to see who will play the gorgeous S&M enthusiast.

Fifty Shades of Grey, the first book in James’ trilogy, is being adapted for the silver screen by the producers of The Social Network. Michael De Luca and Dana Brunetti are working with Universal Pictures and Focus Features after a hotly contested bidding war erupted over the film rights to the first book. No release date has been announced yet.