STOP reading, DROP everything, ’cause I almost ROLLed over. 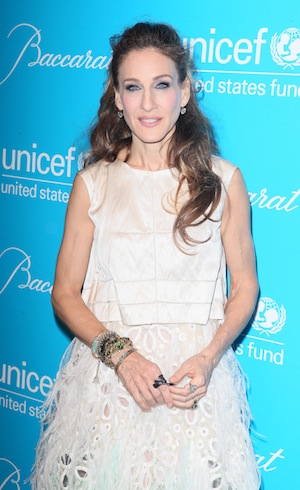 I felt like I had drunk Nyquil when the episode started. Was this the same show? Seriously, who cares if the LL Bean version of Justin Timberlake — excuse me, I mean Matthew Morrison (WIll Schuester, the Glee Club Director) — leaves? We all watch this show for the renditions of our favorite songs as well as the lively student plotlines, not the washed-up teachers who exist only as beached whales. And come on, when I saw Kate Hudson‘s fierceness last week as Cassandra July, my expectations were through the roof for Sarah Jessica Parker. While I had been skeptical, the episode more than redeemed itself in the last five minutes. A few highlights …

Brittany Pierce as Sarah Palin? No, even she has higher hopes for herself in the student elections

I had mentioned last week that you can’t hate Brittany (Heather Morris), and this episode only confirms it. After requesting the deemed “robot”/handicapped Artie (Kevin McHale) as her running mate, she quickly defends her decision to Sam (Chord Overstreet). Sam, who appears to be a possible long-term love interest, appears hurt. Brittany casually mentions that Sarah Palin doomed own her election because she ran with her “grandfather” (John McCain), and since she and Sam are so close — she doesn’t want that to ruin anything (girl, what?). After a hilarious student debate, the student body ends up electing the opposition candidates Blaine (Darren Criss) and Sam, partially as a result of Sam’s stripping to Party Rock Anthem — and yes, a six-pack is involved! It’s OK Brittany, you still have your average, farm-girl looks.

I guess Kate Hudson was catty enough last episode, because Sarah Jessica Parker compensates by being mousy in this one

Does anyone else want more from the force that is Sarah Jessica Parker? In this episode, the woman who owned New York City in Sex and The City plays Isabelle Klempt, a subdued, uninspired and almost menopausal fashionista (that’s ironic, because she is a little dry here). She hires Kurt (Chris Colfer) for the Vogue.com position he had wanted so desperately, and his optimism seems to bring about inspiration in her life. Their rendition of a Frank Sinatra song is a little sleep inducing, but Isabelle’s outfits are worthy of stalking ShopStyle for replicas. I became very jealous when they decided to give Rachel a makeover, revamping her wardrobe from mod schoolgirl to city chic.

Brody (Dean Geyer) traded in his six-pack to share a bottle of wine with Rachel (Lea Michele) — but if you’re that hot, you shouldn’t need to get anyone drunk

OK, so Rachel is a prude. As usual, she begins whining, but this time to Brody about how her fellow dance students called her “Lena Dunham” (Chick, please, we all wish we were as talented as she, and HBO’s Girls is to die for!). He’s so attentive — what a gentleman. Or maybe he’s just surprised she looks halfway decent after her makeover. I know she was careful with Brody initially because she still is (kind of?) dating Finn (Cory Monteith). That’s respectable, right? Well, you transition from prude to tease when you keep telling Brody “no” but then gyrate on him to a Sheryl Crow song. Then you invite him over to cook him dinner? Well to say the least, the chemistry is so strong that I’m sure plenty of reactions are happening in their pants. Ah, but then the doorbell rings. You figure it’s her roommate, Kurt. And even the dinner that she burned didn’t go up in smoke as fast as her face changed when she saw Finn at her door. Game changer, and game over, Rachel. Yeah, I will be watching next week.

This week’s music (not as titillating as last week’s, but Britney Spears’ renditions are tough acts to follow):

Well, the episode was titled “Makeover,” but I can bet Rachel Berry would kill for a “do-over.” Oh, we all have to watch to see how this unfolds!