Let’s pretend for a second that Channing Tatum isn’t married to Jenna Dewan-Tatum and that instead, you two met after his Magic Mike act at the Xquisite Club. 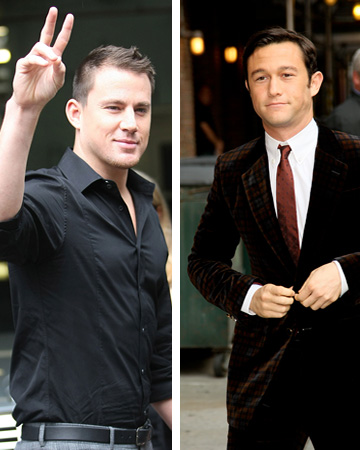 You interested him and he asked you out to dinner. According to a survey by Badoo, only four out of 10 ladies would take him up on this casual fling. In your defense, it’s because you are rightly focused on long-lasting relationships.

When voting for Magic Mike‘s, ehm Channing Tatum’s, ranking on the boyfriend material scale, you all were even less likely to consider him boyfriend material than you were fling material. Twenty percent to be exact. To the six out of 10 who said no to a casual fling with CT, we think you should reconsider. Or re-watch the dancing scenes in Magic Mike.

In the same survey, women were twice as likely to prefer a long-lasting relationship with Looper‘s leading male Joseph Gordon-Levitt. He did play the knight in shining armor for Gotham City alongside Batman in Dark Knight Rises… which instantly makes him boyfriend material, right?

Guilty as charged — we think Joseph is prime man candy and a class act at the same time, and therefore boyfriend material, which is why he was our featured man candy way before he joined the big leagues. That’s what you call true fans.

And just for fun, in Badoo’s survey, Christian Bale ranked equally for having-a-fling quality and taking-him-home-to-the-family material. According to Badoo, this might mean you want a fling with Batman (Who wouldn’t?) and a serious relationship with Bruce Wayne.

Who do you think is more dateable?

Back to reality: Channing Tatum is in a happy and committed relationship. So, maybe we should give him more credit?