George Strait turned 60 this year, so he’s thinking retirement. But, he’s planning one last tour before he rides off into the sunset. 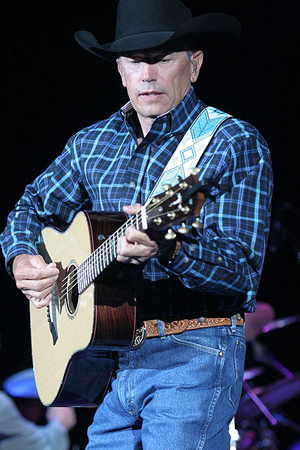 Country superstar George Strait is like an old, loyal friend — you know he’ll always be there to comfort you with a country song in his trademark, laid-back style. Well, not anymore. The country crooner has revealed that his next tour is going to be his last.

Jake Owen’s wedding right out of a country song >>

Strait revealed the sad news on Wednesday, during a press conference at the Country Music Hall of Fame. The Cowboy Rides Away Tour — named for his 1985 hit by the same name — will start in January in Lubbock, Texas, with opener Martina McBride, and will run through 2014.

“It’s the song we’ve closed our show with for years,” he told the press conference, according to The Boot. “I’ve done a lot of neat things in my career. My band and I went to Camp David with President [George H. W.] Bush before he left office and Clinton came in, and we played it for him.”

The reason? He’s getting older — he turned 60 this year — and he wants to go out on top.

“I always had it in the back of my mind, when I turned 60 it might be the time to start thinking about it. I didn’t want to book a tour where nobody came,” he said.

Fat chance of that happening, George — especially with your record 59 number-one hits.

Still, Strait added he might pull a Cher and do another retirement tour if he feels like it.

Kenny Chesney: I wanted to be George Strait >>

So, what’s he going to do with his time after the show wraps? He’ll spend time with his infant grandson.

“I’ll try and steal him away from his parents, maybe take him fishing,” he joked.

Will you see George Strait on his final tour?