Brown and Nicole Scherzinger were spotted getting close Tuesday night. But the longtime friends say that wasn’t a kiss, it was just a conversation. 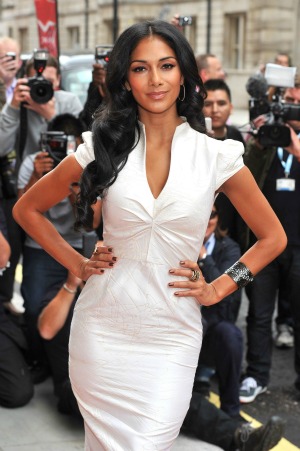 Chris Brown hasn’t dated much since he was arrested for assault of his then-girlfriend Rihanna in 2009. But it looks like now, years later, he may actually be moving on. Tuesday night, X17Online reported that he was kissing another woman on the dance floor of an LA nightclub.

“They were dancing close for a while and being all touchy-feely, and finally, Chris leaned into her,” the website said, according to the New York Daily News. “She put her head on his shoulder, and they started kissing! I couldn’t believe Chris was being so obvious about it!” And who was that woman? None other than former Pussycat Doll Nicole Scherzinger.

But Brown’s rep denies the kiss to TMZ, and photos may support that side of the story. Zoomed-in photos show no lip-locking between the two. “There is absolutely no truth to the ridiculous story,” the rep told TMZ. “The photos that have surfaced are [of] old friends who were trying to talk at a very loud club. I guarantee there will be no photos of them kissing.”

Scherzinger is 11 years Brown’s senior (she is 34 years old and he is 23). According to the New York Daily News, they have been friends for a while, but since his assault arrest, they have had their ups and downs. Plus, Scherzinger is already in a relationship with racer Lewis Hamilton. She spoke with Look Magazine about her feelings for her boyfriend.

“I still think Lewis is one of the most beautiful people I’ve ever seen in my life. He’s perfect looking,” she said, according to the New York Daily News. “But I don’t base any relationship on looks, it comes from the heart and soul first.”

And Brown may not exactly be single either. After a kiss at the MTV Video Music Awards, many are wondering if he and Rihanna are back on.