The actress sat down with Katie Couric today to talk about her life, being 40 and a rip in her dress at The Emmys that almost kept her from going up on stage. 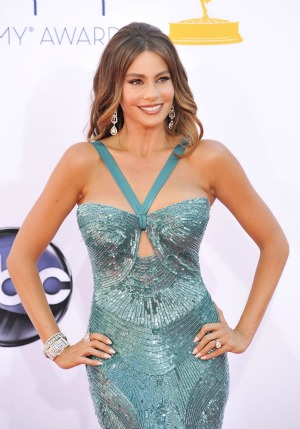 Modern Family‘s Sofia Vergara showed up today on Katie, Katie Couric‘s new talk show, to talk about her body and even her Emmy wardrobe malfunction. Vergara told Couric that while she was doing a dance during her interview with Ryan Seacrest before the show, she must have torn her dress. She realized later it was torn when she stood up to congratulate Julie Bowen after her co-worker had returned from winning her Emmy.

“Everybody saw my booty in that area. And then, I thought it was something small,” she said. “But then when I saw Ed O’Neill, I see him like, when I showed him, ‘Oh my God, this is bad.’ So we waited until the next commercial. I sat through a whole segment. So I wanted to fix it or do something, because I had a feeling we were going to win, and I didn’t want to miss the opportunity to go up there.”

Luckily for Vergara, it seems the show has people on hand to deal with such crises. “So I went downstairs. Those ladies, I don’t know where they found them,” she said. “They took me underneath the stage. They sewed me in. I didn’t even take the dress off.”

But it didn’t stop Vergara. She was taped at an after-party for the Emmys doing the same kind of dance, and rightly so. The 40-year-old is still considered one of the hottest celebrities in Hollywood, but she doesn’t always feel that way.

“Everybody tells me, ‘You look better now.’ That’s not true. I’m not complaining, I feel great for a 40-year-old, yeah, fantastic,” she told Couric. “But you cannot compare the firmness, everything, [to] when you’re 20- years-old. It’s the truth. You have more hair. More everything. No pores. Come on.” She also told Couric she might consider having another baby, because even though she’s 40, “I realized most of my American girlfriends are my age and they still don’t have kids. So I guess if I wanted to do it, I could do it.”

But the actress said she is just too busy this year to consider it. She was just named Forbes Magazine’s top-earning female celebrity and just started a new season on Modern Family.