Love it or loathe it, Here Comes Honey Boo Boo isn’t going anywhere! Shortly before the season finale aired Wednesday, TLC promised fans Honey Boo Boo Child and the whole family will be back for some holiday fun. Hurrah? 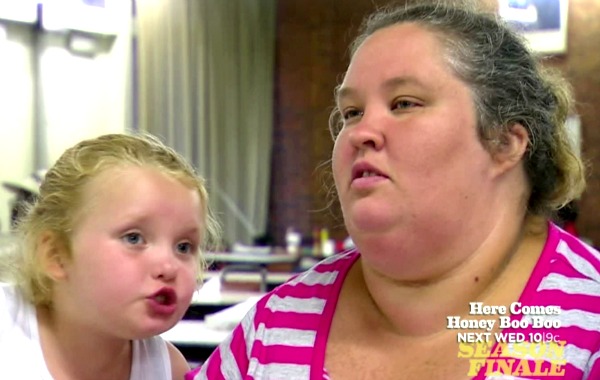 Here Comes Honey Boo Boo some more! If you thought Wednesday night’s season finale of the controversial show was the last you’d see or hear of Alana Thompson and the gang for some time, you were sadly mistaken.

TLC has announced the 7-year-old pageant star known best as ‘Honey Boo Boo Child’ will return in just a few months for a series of ‘HOLLAday’ specials. (For the record, that’s TLC‘s description — not ours.)

TLC’s Breaking Amish may be completely made up >>

In a press release announcing there’s more go-go juice and couponing sprees to come, TLC’s general manager said, “Here Comes Honey Boo Boo has become a pop culture phenomenon. What you see is what you get, and we are excited to share even more of Alana and her family’s unbridled hilarity, sincerity and love with our viewers.”

Not all who have viewed the Toddlers and Tiaras spin-off show are pleased, however. A Facebook group titled Please Cancel Honey Boo Boo currently boasts over 3,000 members who are fed up with TLC’s programming choices. A post from Monday reads as follows:

“Here Comes Honey Boo Boo” and the family seen on the show does NOT REPRESENT AMERICA OR SOUTHERN CULTURE!

The World already views America as overweight and uneducated. What do you think people overseas think of America when they watch this show?

The Here Comes Honey Boo Boo season finale, in which the star’s teen sister gives birth, is poised to bring in the show’s highest ratings yet. “Alana gears up for her big pageant, but plans change last-minute when Chickadee goes into labor,” the episode description reads. “Baby Kaitlyn arrives, and it’s soon obvious that she’s a very special baby.”

Special how? Well, it turns out the little lady was born with three thumbs. One, per usual, is on her left hand, and two are on her right!

Will you be watching Honey Boo Boo Child’s finale? How about the “HOLLAday” specials?