This menagerie of beasts makes for a wild, fast-paced comedy. The pilot features a tiger, a penguin and even a boa constrictor. If animals are your thing, this is the show for you. 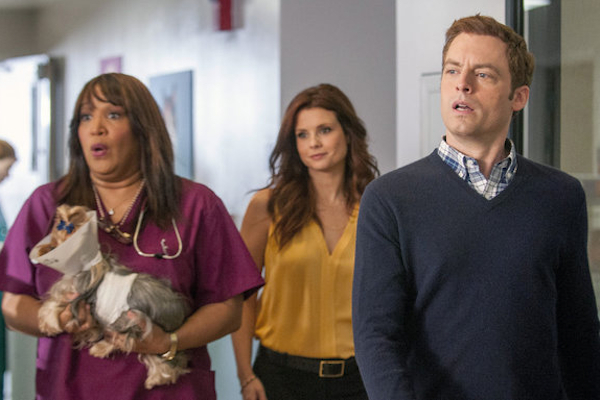 Meet Rizzo (Crystal the Monkey), a Capuchin monkey who plays veterinarian Dr. George Coleman’s (Justin Kirk) sidekick. You may recognize Crystal the Monkey from The Hangover II — well, at least some of Hollywood’s primates are getting enough work to deem them eligible for S.A.G. health insurance.

Dr. George is a great vet with a dry wit and prickly bedside manner — Dr. House for pets? Unfortunately for him, the ex-girlfriend who walked out on him three years ago is back with a big surprise: she’s just inherited the animal hospital where Dr. George works.

It’s clear he still hasn’t gotten over Dorothy Rutledge (JoAnna Garcia Swisher), and her feelings for him may not be entirely resolved either. In the meantime, Dorothy doesn’t want her grandmother’s legacy to “turn into a zoo,” so she’ll be running the hospital from now on.

This unnerves Dr. George, who decides to kidnap a sick Yorkie from a man who claims he’d rather put the dog down than pay $2,000 for the surgery. Because Dr. George loves animals and hates to be manipulated, he performs the necessary surgery anyway and convinces the litigious man to pay when Dr. George reveals he found a coaster from a strip club in the dog’s stomach.

Justin Kirk, formerly of Showtime’s Weeds, is a true talent and master of dry humor. He can spew wordy dialogue with the best of them. When at a park with a fellow vet eyeing women, he sees a pretty lady with an enormous pooch and says, “The Great Dane is the Subaru of dogs. That lady’s a lesbian.” Now that Justin Kirk has a monkey and a network show, his potential is limitless.