Hope Solo is making some big accusations about the results of Dancing with the Stars. 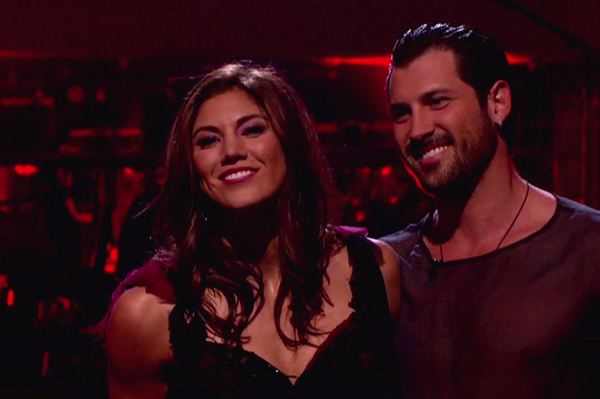 Apparently U.S. soccer champ Hope Solo isn’t done getting attention. The Olympian — who first ignited controversy a few weeks back by accusing Dancing with the Stars partner Maksim Chmerkovskiy of abuse — is now saying that the popular ABC dance show is rigged.

The 31-year-old makes all of those accusations in her new book, Solo: A Memoir of Hope. In the memoir, she details her rocky relationship with the sexy “bad boy” dancer and his outburst heard ’round the world.

“Maks later told me that he had argued with the judges because he had been told we were going to be eliminated, that there was some secret memo going around that said who would be ousted each week,” Solo wrote, according to RadarOnline. “He explained that he wanted to cause some drama on the live portion of the show so that they wouldn’t be able to resist keeping us around, hoping for more fireworks.

Apparently the outburst worked — they weren’t eliminated that week.

Solo might find herself in a courtroom before this is all said and done: ABC suits are reportedly exploring their legal options to shut her up. Plus, Maksim apparently wants to sue her, too.

“Maks is one of the nicest guys in the world. This is 100 percent not true,” a source told The Huffington Post in August. “At the moment, Maks and ABC are not making any public statements, as they are considering legal options. Not only did Hope not tell the truth in the book, she also signed a contract with the producers of DWTS and could be in breach of contract.”

Is she being truthful about her claims? We hope she’s not lying — but we wouldn’t be too surprised if the rigged rumor turns out to be true.

Do you think Dancing with the Stars is set up by producers?