Dancing with the Stars: All-Stars made the first cut on Tuesday night. The results? Bye-bye, Pamela. 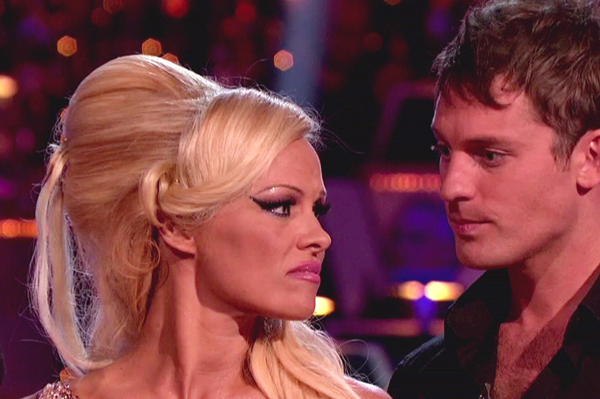 We’re going to quit our jobs and become psychics because we totally called Pamela Anderson’s elimination from Dancing with the Stars way back in July. That prediction came true on Tuesday night when the former Baywatch babe earned the dubious distinction of being the first celeb voted off the new All-Stars season.

Bristol Palin hopes to “not gain weight” on DWTS >>

How does Anderson feel about it? Pretty badly, apparently.

“She apologized,” her partner, Tristan MacManus, told People after the elimination. “She felt like she let me down. My assurances were that she didn’t. Obviously she was disappointed to go early, which I was myself. But someone has to leave so others can move on.”

The couple earned a paltry 17 out of 30 for their cha-cha on Monday night. The blond bombshell was visibly humbled by the judges’ response to her dance.

“I know I’m not the best dancer,” she said. Look at the bright side, Pam: At least you can rekindle your love life.

Anderson’s elimination was a relief to the other dancer in the bottom two: Season 2 champion Drew Lachey.

“I thoroughly enjoy being challenged and pushing myself to learn something new but throw in roughly 20 million people watching your successes and failures, and you have the potential for a massive ulcer,” Lachey wrote on his People.com blog before the show started.

So, who is the favorite to win this season? It’s really anyone’s game at this point, but Bristol Palin has her sights set on the win.

“I was 19 [when she did DWTS] and now I’m 21, and almost 22,” she told People earlier this week. “I think that if I ever hear anything that’s being said negatively about me or my family, that has given me motivation to want to do better.”

Plus, she’s a lot lighter on her feet these days, thanks to “cutting the crap” out of her diet.

“I think I’m just more active and cut out all the crap out of my diet,” she said, adding that her son, Tripp, has helped her stay active.

Who do you think will win Dancing with the Stars: All-Stars?