When many of us think of Macy Gray, we think of a woman who has fabulous funked-up hair that would look ridiculous on the rest of us, we think of Prince-esque fashion and a music empire that has been built around a one-of-a-kind raspy voice. Here Macy visits with us about her latest movie, music and what Zac Efron is really like… 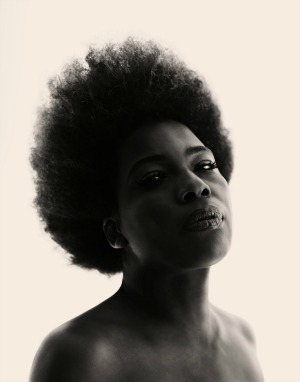 Kat: You’re in a new movie, The Paperboy, which is due out this fall. Can you tell us a little bit about the movie and your character in it?

Macy: It takes place in the ’60s, in the south. It’s a really twisted murder mystery. It’s all about the investigation of an old murder and I play a maid.

Kat: In this movie you worked with Zac Efron and Matthew McConaughey, which makes you pretty much the envy of every female in America.

Macy: Well, Zac is adorable. Like as beautiful as he is, if the girls knew how sweet he is, they’d lose it. Matt is this machine. He knows what he’s doing at all times. I actually learned a lot from him. They’re in a whole other stratosphere of acting, so I was fortunate to be around that.

Kat: Speaking of cinematic crushes, who was yours when you were growing up?

Macy: My girl crush was Diana Ross. I was just so in awe of Diana Ross. I always wanted to be just like her when I grew up. I used to love those old Marlon Brando movies. I think he’s the most beautiful man that ever lived when he was younger. Oh! And Buck and the Preacher with Harry Belafonte and Sidney Poitier.

Kat: At the end of October, you’re releasing your own version of Stevie Wonder’s album, Talking Book. Just curious: of all the artists and music you had to choose from, what made you zero on in this particular collection?

Macy: My producer and I were talking about cover songs, and he was saying I should cover a whole album. He said people remake movies all the time, but he didn’t think anyone had remade an entire album. So we started going back and forth on different records, but Talking Book was something I really got in to when I was in college and I knew every word and every beat. It was a record that I really loved.

Kat: I guess I didn’t realize you went to college. What’s your degree in?

Macy: I graduated with a degree in screenwriting.

Kat: You’ve had a long and varied career. What’s been a career high for you?

Macy: One of the best things that has come of it is seeing the world. Before I started making records, I had never been out of the states. Suddenly, I’m in Paris and London and Germany and places that I never dreamed I’d be. Even if I had become a world traveler I may have never picked some of these places. It really opens your mind when you get to see different cultures and different kinds of life.

Kat: Sometimes you read about when artists go on tour they get so busy that it’s all concerts, hotel rooms and busses. Were you actually able to check places out?

Macy: Oh yeah. I always go out and see different things. It’s exciting to get around in different places.

Kat: How about a career low? Was there ever a time when you thought, “Holy Lord, what am I doing?”

Macy: Boy. When you get stuck in the business of it. There is always strategy and planning that goes on and you have to wait for all that. There’s all this music that I want to put out.

Kat: I saw an interview where you said you wanted to be a fireman. Is there a story behind that?

Kat: You’ve got three teenagers! How is that treating you?

Macy: They’re awesome people. Raising kids at any age is difficult, and when they’re teenagers it’s another level of difficult. It’s not easy, but I’m trying to work it out.

Kat: Do they ever gang up on you?

Macy: No, they don’t really do that, but they are definitely on each other’s side on some things. They’re teenagers so they see things the same way, which blows my mind sometimes — their perspective on some things. And then the fact that they all agree with each other is hilarious.

Kat: Do they like to listen to Mom sing or Mom’s music?

Macy: They know all my stuff and they’re with me in the studio a lot and they hear it when I’m at home after I record.

Kat: Do they ever come to you with a song and say, “Hey Mom, you should put this on your next album.”

Macy: They definitely help me out with the songs that they think are the best ones. Yeah, they’re opinionated when it comes to music. They help me out a lot actually.

Kat: So you’ve got a movie coming out, an album coming out, are you going to take the winter off? What’s next?

Macy: I’m actually touring this winter, and I shoot a movie at the beginning of 2013, and after that I’m not sure. I know I’ll be busy.