As usual, you can barely understand what M.I.A. is saying, but this song is unbelievably catchy and remarkably liberating. 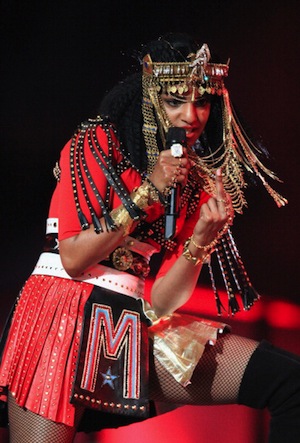 Do any of you remember Willa Ford? Yeah, how could you? She was that one-hit wonder of the early 2000s with that hit, “I Wanna Be Bad.” So for most of us, we can’t really connect to her level of skank, but we sure felt like being naughty was sexy.

When I listened to “Bad Girls” by M.I.A., I automatically thought: This has nothing to do with feeling sexy, but more so about feeling empowered. Ironically, you would never be able to tell that this song has so much depth.

Open your windows and let this song blare — it’s about liberating women from those who oppress them. You’ll hear “Suki Zuki” and maybe like me you’ll think she said “Sookie Sookie” (got so excited, True Blood anyone?).

But it actually means “drive, drive” in Arabic. According to MTV, the use of Arabic words is deliberate, in order to mock how Saudi Arabia doesn’t let women drive. Filmed in Morocco, it revolves around being dressed in Arab clothing, dissolving those rigid rules, allowing women to drive, and do tricks with their cars that are otherwise reserved for men.

Yes, M.I.A. never shies away from conflict and this track also could double as her way of acknowledging her haters. Don’t we all remember her flipping the bird for no reason at the Super Bowl?

StarPulse quoted Madonna referring to it as a “teenager” thing to do. But, don’t let that mistake fool you. She’s fearless and well-read on world issues, and is a devout humanitarian. Could this song almost seems like retailation for all the backlash she gets for being so “out-there”? “Live fast/die young/bad girls do it well” — it’s not the most complex logic, but is better than saying YOLO.

Sometimes it seems her music sounds like junkies would understand it, but even I have to admit this song is different. Starting off with an array of quirky instruments with an almost ethnic flavor, the chanting of “live fast/die young/bad girls do it well” begins (and never ends because I promise you — you will be singing it later).

M.I.A. then starts with her spoken verse. If you were a fan of Beyoncé‘s “Run The World,” or even “Independent Women” by Destiny’s Child, stand up for your fellow sisters who are not so far away and press play.