The number of single and available Jersey Shore cast members is dwindling now that JWoww is engaged to Roger Mathews. 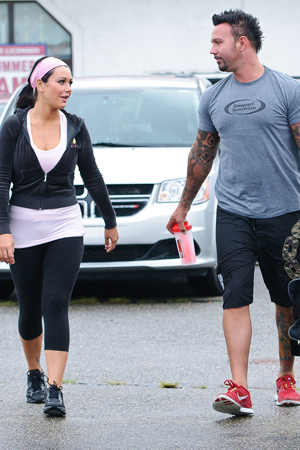 Sorry guys, JWoww is off the market: Jenni Farley is engaged to her bodybuilder boyfriend Roger Mathews. The news comes just weeks after the Jersey Shore star denied some engagement rumors. Our thoughts? They’ve been engaged for a while, judging from their cover story in the new issue of InTouch.

Mathews popped the question while the couple was out skydiving.

Down to fart? JWoww rips one during interview >>

“I look over and see a hand-written sign: ‘Jenni, will you… ‘ and then I turned to him and freaked out,” she told InTouch. “The whole time I’m screaming, ‘What are you doing? What’s going on?’ He’s like, ‘I want to spend the rest of my life with you! Will you allow me to?'”

That’s actually pretty cute. As for the ring, JWoww said it’s the big rock she’d hoped for — but never actually imagined she’d get.

“It’s more than I ever expected,” she added to the magazine. “Roger’s not an average-looking guy, he’s huge: his personality, his size [6’4″]. So I always said, ‘I want my ring like you — big! The bigger the better!'”

The pair started dating during Season 3 of the MTV reality show after the 26-year-old ditched an abusive relationship. They might fight a lot — as fans of Snooki and JWoww saw firsthand — but it’s all in love, they said.

“Me and him are hotheads. We go from zero to sixty, and he’s the first boyfriend that I’ve ever had that won’t back down… Roger’s like, ‘You’re out of your mind,'” she told MTV News earlier this year.

So, we’re thinking a double wedding for Snooki and JWoww. It only seems appropriate, right? As for the Jersey Shore clan, it seems that DJ Pauly D is the only single one left.

“Hmmm Its Official Im The Only Single One Left …. Now Accepting Applications #SeriousInquiresOnly,” he tweeted on Wednesday morning.