The old law of the West and the new crime of the East battle for control of 1960s glamorous Vegas in this new CBS drama. Action-packed and filled with pretty good one-liners (not the kind that make you cringe), this show shines like the Las Vegas Strip. 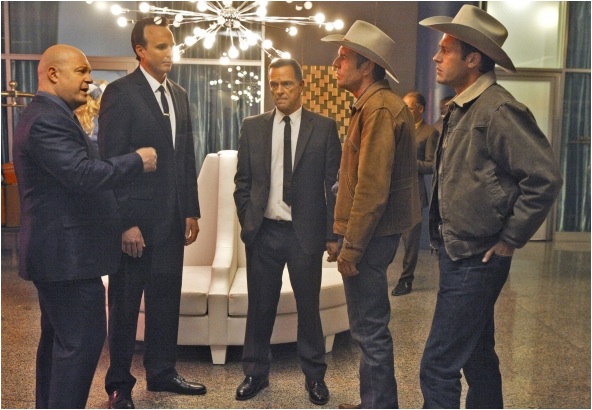 Before the Las Vegas Strip turned into the preferred destination of barely legal frat boys and couples who want to get married by Elvis, there was the glamorous Vegas of 1960. Filled with potential to become a lavish vacation spot and a gambler’s dream, Vegas was a haven for mobsters who wanted to start new “business ventures.” However, in this dusty desert, not everyone’s happy with the new arrivals, especially fourth-generation rancher Ralph Lamb (Dennis Quaid).

Not only does Lamb have a hard time accepting the changes in his city, but he really doesn’t like when someone puts his hands on him either. Don’t let the salt-and-pepper locks fool you — this cowboy still knows how to throw a punch and knock ’em out.

When the governor’s niece shows up dead in a desert, Lamb’s past military experience makes him the perfect man to find the killer. But, he only agrees to take the job as sheriff if the mayor can get rid of the planes that keep flying over his field and scattering his cattle. This guy really isn’t interested in city development.

New to the land of slot machines and show girls is crime boss Vincent Savino (Michael Chiklis), whose mission is two-fold: make cash money in the casino business and “find the rat.” And this guy is a tough boss. He fires people on the spot and is not afraid to bloody his knuckles on someone’s face. But he always makes sure to dust off his fedora and straighten his suit before he gets back to running his casino. I have a feeling Lamb and Savino aren’t gonna get along too well.

And then there’s the pretty Assistant District Attorney Katherine O’Connell (Carrie-Anne Moss), who’s been assigned to the case. She grew up on the ranch next to Lamb’s, but I think there may be something more than friendly neighbor vibes between these two. I definitely caught some flirtatious smirks and cute banter. 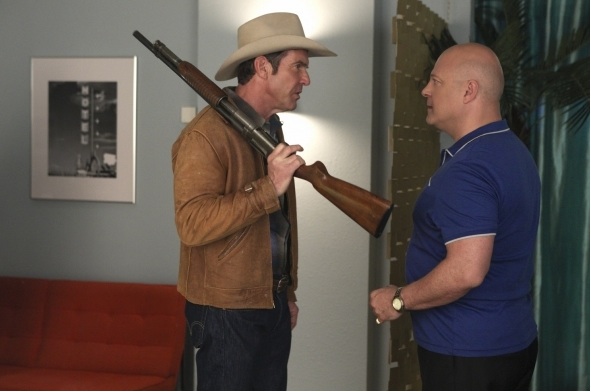 In this town, it’s no surprise that Lamb’s investigation leads him straight to Savino’s office to arrest one of his men. The two go head to head in a turf war. Who really runs Vegas? This leads to the best one-liner of the episode when Lamb stares down Savino and says, “I’m the law here, Mr. Savino, and I will decide whose breaking it.” Gotta love a tough guy in a cowboy hat, am I right?

When Lamb finally nabs the bad guy it looks like the law won, but that won’t stop Savino. Another dead body is found in the desert and this time it belongs to a corrupt cop who was in cahoots with the mob. Looks like Lamb and his new gangster pal are headed for another round.

Check out this extended preview of all the action you missed on this wild first episode!