Madonna instructed her fans to vote for President Obama in the November election. Oopsies, though — she called him a “black Muslim.” 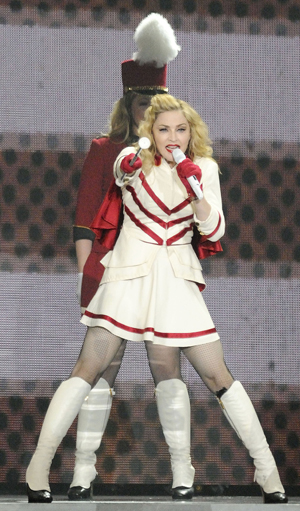 You know those constant rumors that President Barack Obama is a secret Muslim? Well, they’re not true — but try telling that to Madonna. The 54-year-old singer caused quite a stir on Monday night when she stumped for the president in Washington D.C.

Madonna should probably just stay away from France >>

“Y’all better vote for f*****g Obama, OK? For better or for worse, all right? We have a black Muslim in the White House. Now that’s some amazing s**t,” she said during a long rant about politics. “It means there is hope in this country. And Obama is fighting for gay rights, so support the man, godd****t.”

It’s pretty likely that Madonna knew comments like these would attract tons of attention, but this is hardly the first time she’s shown her support for Obama. The singer unveiled an Obama “tattoo” on her back during an August concert in New York City.

“I’ve seen some scary things,” she told the audience at Yankee Stadium. “I’ve seen people being locked up and put in jail for speaking their minds, for being gay, for not practicing the right religion, for not dressing the proper way. Yeah, it’s scary. But what it made me realize is how lucky I am to be living here in America. It doesn’t mean that this is the perfect country. We have a long way to go.”

We’re sure the prez appreciates the sentiment. Somehow, though, we doubt he appreciates another comment about his supposed Muslim faith — especially since this time, it’s coming from one of his own supporters.

Madonna: Seeking publicity, or sincere in her support for Barack Obama?