Thanks, Carrie. I pressed play and almost dropped my bottle of peroxide on the “GIRLS RULE” crop tee I was going to wear in honor of your next girl anthem. 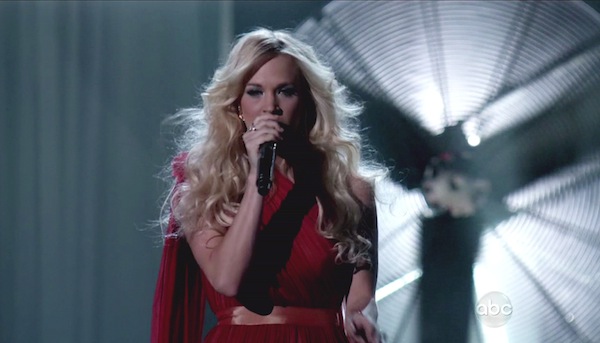 Her title track, “Blown Away,” certainly makes sense if you’re expecting another bright and bubblegum hit from Carrie Underwood. My assault had been ready. I had a handful of insults already pre-packaged: “Blown away? By what? A breeze? A blow-dryer? Did someone cheat on her again? Was it a football-playing cowboy that cheated on her now?”

Consider me blown away.

Starting with an eerie instrumental combination reminiscent of a Florence + the Machine song, in comes Carrie, never straying too far from her country roots by (of course) telling us a story. She begins painting a mental picture, layer after layer, alluding to but never overtly describing the disturbing overtones of pain and abuse.

Beautifully written and irrefutably haunting, Taste of Country reveals that Chris Tompkins and Josh Kear were not only the writers of this song, but also of her smash hit “Before He Cheats.”

Although, on a superficial level, how many of us can relate to an alcoholic father, living in Oklahoma, and a tornado’s impending doom being our breaking point (the Wizard of Oz parallels are pretty ingenious)? With the song on repeat, I began to realize that its adaptability depends on the core needs of everyone: a need for hope, a need for change and a need for redemption.

The song hits a climatic point during the chorus and the listener’s need for an emotional release meshed well with the display of the range of this American Idol alumni and country superstar.

“Every tear-soaked whiskey memory blown away, blown away”

Ruthlessly tossed aside, her stereotypical radio hits seem a distant memory in exchange for this somber, more meaningful message. Yes, I was blown away, but what goes up must come down. The song didn’t end with a crashing and sudden halt, for which I was grateful, but it did leave me wanting more because the chorus was repeated more than Carrie’s dye job! Could the song have been better with more story? Possibly. Could the tune stand alone without the riveting lyrics? Probably not. But Carrie’s voice is flawless in her delivery.

Does this have mainstream potential — in other words, will Kanye, David Guetta, and Carly Rae Jepsen fans all be blasting this in their cars? Unlikely. It takes a few listens and reading the lyrics to truly grasp the meaning. Only die-hard Underwood fans may able to love it on the first listen, and the highest peak it ever reached on Billboard’s Hot 100 chart was #9. Similar dark songs like Kelly Clarkson’s “Because of You” and Pink’s “Family Portrait” sacrificed mass appeal for honest lyrics and sincere emotion, all while doing relatively well — and as such, Carrie has now taken a risk and will impress her listeners with her new lyrically dramatic — not melodramatic — sound.