Kris Jenner thinks pretty highly of herself. How highly? Let’s just say she doesn’t want to wait in line with us plebeians to get an iPhone. 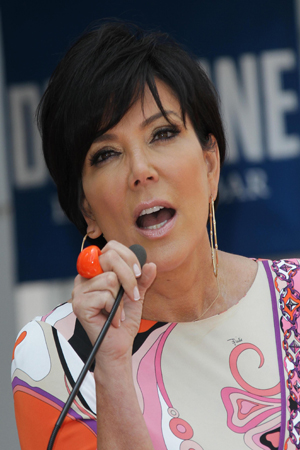 Are you one of the millions of people who waited to get an iPhone 5 on its release date last week? If you were, just know that Kris Jenner thinks she’s better than you and shouldn’t have to wait for hers.

Why did Kris Jenner flash her breast implants on national TV? >>

The momager of Kim Kardashian and the Klan reportedly phoned an Apple store last week and told them to “set aside five iPhones for her and she’d send someone to pick them up when they were released on the[sic] September 21st,” according to RadarOnline.

Apple’s reaction? They laughed at her, as is appropriate in this sort of situation.

“Kris got angry and demanded to talk to the manager,” the source told the website. “But no manager would speak to her because this wasn’t a negotiable issue.”

Apparently that little pesky issue wasn’t a deterrent to Jenner: She simply sent her assistant to the store to get the phones without waiting in line.

“‘I’m Kris Jenner’s assistant. I’m here to pick up the five iPhones,'” the assistant reportedly told the Topanga Mall Apple store employee. “They had a lot of extra security on for crowd control and one of the guards told the assistant ‘See that line? Go wait in it and you will be helped.'”

If this is true, it’s the latest in Jenner’s recent diva behavior. First, she talked about her breast implants on television while the rest of the country mourned 9/11. Then, she criticized June Shannon, the mother at the center of Here Comes Honey Boo Boo.

“To say Kris is not a fan of Here Comes Honey Boo Boo is an understatement,” a source told RadarOnline last week.

“The show has become bigger than Keeping Up With The Kardashians, and Kris is starting to feel threatened by its success,” the source continued.

“Kris especially has a strong dislike for June, claiming the beauty pageant world is vile and that June is a bad mom for ‘exploiting’ Alana in that way. Kris thinks it’s all a ploy to make money, and says she sees through it and thinks it is absolutely disgusting.”