Thor and Catwoman in the same film? According to an exclusive report, Anne Hathaway and Chris Hemsworth look good to go for Steven Spielberg’s sci-fi film Robocopalypse, slated for 2014. 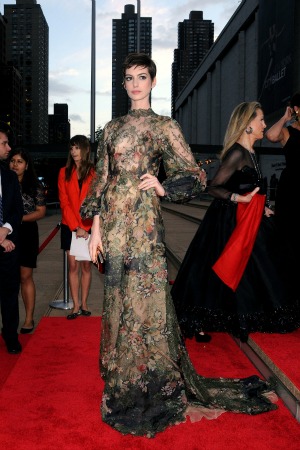 Anne Hathaway, whose feline form recently filled out the role of Catwoman in The Dark Knight Rises, is in talks for the female lead in Steven Spielberg’s upcoming Robopocalypse, according The Hollywood Reporter.

Norse god Chris Hemsworth, of Thor and Avengers fame, is also rumored to be discussing a starring role.

Based on a best-selling 2011 book by robotics engineer Daniel H. Wilson, Robopocalypse (try saying that three times fast) is set in the near future, when robots in the home are common. When one robot attains self-awareness, he machinates to destroy the human race with a robot uprising.

Spielberg’s DreamWorks had been developing the film even before the book was published, having bought the rights to Wilson’s unpublished manuscript in 2009.

It will be Spielberg’s first sci-fi film since War of the Worlds, and brings his studio together with 20th Century Fox, which together produced Minority Report.

Outgoing Fox Filmed Entertainment chairman Tom Rothman, who reportedly has a close relationship with Spielberg, has been confirmed as producer.

“If you are in politics, you dream of a call from the White House, in baseball, from the Yankees, in movies from Steven Spielberg,” Rothman said in a statement. “Robopocalypse is the kind of important epic entertainment, a big movie with big ideas, that Steven does better than any filmmaker on earth. … I enjoyed being unemployed for a week, but this will be way more fun.”

The film will shoot in Montreal and is set for release in April 2014.

Who will be a prettier action star? Anne Hathaway or Chris Hemsworth?