Country supergroup Rascal Flatts takes a break from their busy tour to give SheKnows the scoop on playing favorites with songs off their hot new album, kicking back with their tourmates and making time for their families. 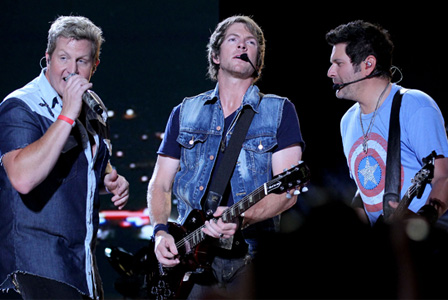 When someone utters, “So a man walked into a bar,” it’s generally safe to assume a bad joke will follow. But, in the case of Rascal Flatts, it signals the start of their story — the day two founding members of the trio, Jay DeMarcus and Gary LeVox, teamed up at the Fiddle and Steel Guitar Bar in Nashville.

Since that day more than a decade ago, the band — which counts guitarist Joe Don Rooney as its third member — has sold more than 21 million albums and racked up more than 40 major music awards. Their latest ventures, however, have the guys of the Rascal Flatts gang riding a new high.

Burning up the charts with a new album

From a band that has churned out 13 number-one singles and countless other hits such as “Bless the Broken Road,” “These Days” and “What Hurts the Most,” it should come as no surprise that their newest effort, Changed, already shows the promise of its predecessors.

The album’s first single, “Come Wake Me Up,” continues to climb the Billboard charts. When SheKnows asked the gang which songs from the CD are special to them, Gary cast his vote for “Come Wake Me Up,” explaining of its importance, “That was the very first song we put on hold for the whole project.”

Tearing it up on tour with other bands

They’ve taken some of the hottest solo acts in country music on tour with them — think Taylor Swift and Jason Aldean — but Rascal Flatts hadn’t booked other bands to share the stage with them … until now. For the first time, the trio is touring with nothing but other ensemble acts. Since early June, they’ve been rocking venues across the country alongside Little Big Town, Eden’s Edge and the Eli Young Band.

You do the math … that’s a lot of unique personalities! But if you are looking for some tour-story drama, keep looking. According to Jay, the all-band all-the-time tour is going off without any major hitches.

“We get along great with everybody,” he assured SheKnows. “After we get off the stage at the end of the night, we’ll all hang out and sit around and have a couple beers. It’s been a really, really cool chemistry.” 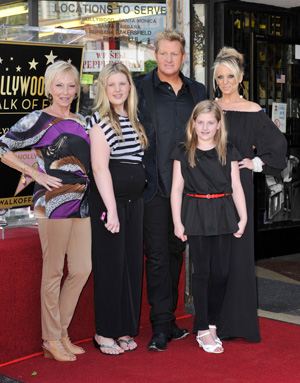 Carving out quality time with their loved ones

So with such a busy schedule that includes time on the road with other bands as well as a hefty share of focus from adoring fans, how do the guys make sure their families don’t feel left out of the loop?

First and foremost, they’ve set up their schedule so they can be home for the majority of the week. Inevitably, though, that still leads to weekends spent away from their wives and kids. So when Rascal Flatts is on tour, they turn to technology — relying on iPhone features like “Facetime” and web-chat programs like Skype.

“I do Facetime with Jay’s kids, he does Facetime with Gary’s kids … it’s really crazy stuff,” Joe Don joked to SheKnows. “But really, we’re lucky to be in this technology-savvy world we’re in, because in the ’80s and most of the ’90s even, you had to get a pay phone at a gas station somewhere — or so they tell me … I’m pretty young.”

All jesting aside, the guys of the gang count themselves lucky to have loving support systems to come home to. They may enjoy jet-setting around the globe to sing at sold-out shows, but the men of Rascal Flatts consider walking through their front doors to awaiting diaper or dish duty to be their biggest blessing.