Hot on the heels of a year filled with transformation, Rascal Flatts sits down with SheKnows to discuss the country music megastars’ metamorphic changes and what they hope to accomplish moving forward. 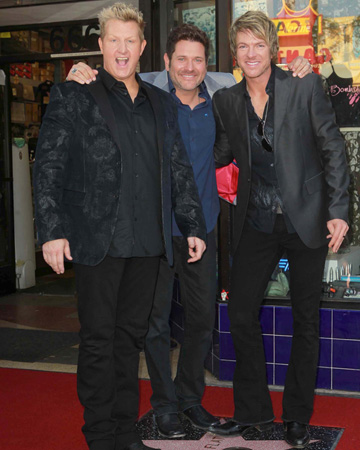 Unbeknownst to their legions of loyal fans, the three men who make up Rascal Flatts — lead singer Gary LeVox, bassist/vocalist Jay DeMarcus and guitarist/vocalist Joe Don Rooney — nearly called it quits a year ago. Happily, country music’s resident hit-making trio worked through the darkness and emerged to shine even brighter on the other side.

Following the demise in 2010 of their longtime label and a falling-out with their longtime management team, the men of Rascal Flatts met up at Jay’s house for a heart-to-heart to discuss the band’s seemingly bleak prognosis.

The guys didn’t want to walk away from their music or each other — they are quick to point out that there were no internal squabbles or power struggles to speak of — but knew a change was in order.

“When we had the meeting at Jay’s house, we asked ourselves if we wanted to continue doing this at this level,” Joe Don explained to SheKnows. “We asked, ‘What can we do to recommit ourselves to make this better, if possible?'” According to the guys, it was that recommitment which reinvigorated them.

Justin Bieber and Rascal Flatts team up for video shoot >>

Newly energized, the band found a home at Big Machine Records and a management team in Spalding Entertainment. Nothing Like This, their first CD for their new label, reached number one on the charts and spawned several hit singles.

Seemingly, a fresh perspective was just what Rascal Flatts needed. “Scott Borchetta [of Big Machine Records] came to the table with so much energy and excitement about what the Flatts were doing, and I think that helped push us into a different spot emotionally,” Jay told SheKnows. “It reenergized us as a band to go, ‘You know what? There are still people out there who believe in us as a band, and that — for me — created a brand new belief in what we were capable of doing.”

With a strong new team behind them, a successful new album under their belt and each other to lean on, Rascal Flatts found firm footing upon which to rebuild their shattered confidence. “We realized we’re all in this together and see this the same way, and I think that is a special connection we all three have,” said Joe Don.

And what better way to celebrate their longstanding success — in spite of any hiccups — than with a star on the Hollywood Walk of Fame and a coveted Grand Ole Opry membership? Rascal Flatts has earned both this year, a feat that Joe Don says brings a big ol’ smile to these country boys’ faces.

iHeartRadio Music Festival 2011: A look back >>

They may have met some major milestones lately, but the ambitious band isn’t finished yet — their bucket list includes winning a Grammy and taking their music global. “I think we want to travel the world and share our music, even more so than we have in the past,” Joe Don shared with SheKnows. “We’re looking forward to next year and to doing that.”

Hands down, however, Gary, Jay and Joe Don feel like their biggest accomplishment and biggest motivator are one and the same: making music they completely believe in and are proud of.

“The greatest reward is hearing the stories that the fans tell us on a nightly basis of how our music has affected their lives or touched them in some way or gotten them through something,” Gary emphasized. “That will forever be our reward.”