Sword fights, bounty hunters, and chain-gangs dominated Charlie and Miles’ journey this week. It’s like being in an apocalyptic world… from the past? Here’s all the blade-clanging, power struggles you missed! 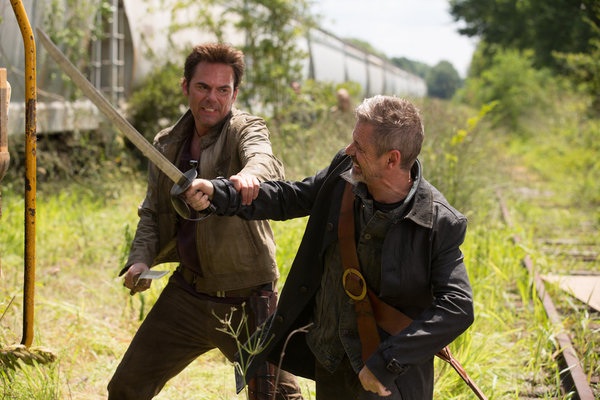 Charlie (Tracy Spiridakos), Aaron, Maggie, and our only hope of salvation from the corrupt militia, Uncle Miles, continue their quest to rescue Danny in this week’s episode. Here’s all we need to know about Miles Matheson (Billy Burke): He’s pretty much the master of sword fighting. Pretty sexy if you ask me. It certainly comes in handy considering General Monroe (David Lyons) has a price tag on his head, and he can’t seem to get away from pesky bounty hunters and Nate, the cute but troubled archer.

After running into a few of these of these greedy sword-bearing rivals, Miles decides he needs to find the mysterious Nora (Daniella Alonso) because she’s “really good at blowing stuff up.” Of course, despite Miles’ demands to stay behind, Charlie follows after. This girl just does not listen.

Eventually, they find the beautiful and tough as nails, Nora, (I wonder how it’s so easy for them to navigate without GPS?) as a prisoner on a chain-gang led by the militia. Just to give you a taste of how bad this military really is, they burned down the home of a man who carried an American flag and then shot a prisoner who passed out from exhaustion. I’m pretty sure that’s the ultimate definition of bad guys. 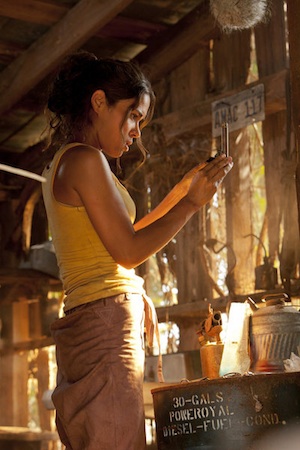 Nora and Miles clearly have a jaded past. Filled with sarcastic banter and secretive “you owe me”
comments, they come across as scorned ex-lovers who kind of hate each other, but probably still really love each other. You know the type.

The truth about Nora is: She belongs to the Rebels, a group of believers who have banded together to form a resistance against General Monroe and his military. And from the look of things, there’s about to be an uprising.

Biggest surprise of the episode? Charlie’s mother, Rachel (Elizabeth Mitchell), is alive! She’s being held captive by General Monroe. And by “captive” I mean set up in a lavish, bright room wearing fine clothing. Monroe tells her that her husband, Ben, is dead and he’s kidnapped her son, so she better talk about what she knows about the power. Oooooh, I wonder what she knows about the power!!!

Here’s a tense scene of just one of the many men interested in the price on Miles’ head.