Goldie Hawn is feeling sexy at 66, and she’s not afraid to take a spin on a stripper pole — even if it belongs to her daughter, Kate Hudson. Is that weird? 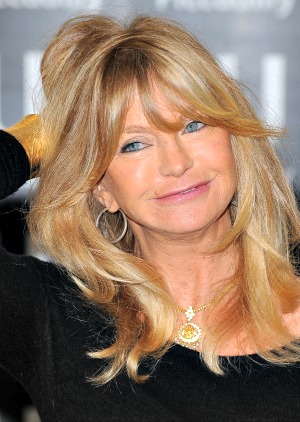 Goldie Hawn and Kate Hudson are like-mother-like-daughter in more than just the looks department. The elder actress has taken to testing out the younger’s stripper pole — in the name of exercise, of course!

Apparently Kate Hudson became a fan of pole dancing classes years ago, and in order to “work out” at home, the fiancee of lucky Muse frontman Matt Bellamy had a pole installed in her home’s bathroom.

No ring for Goldie Hawn? Blame the kids >>

During her recent stint as co-host of Anderson Live!, Goldie Hawn explained of her daughter’s apparatus, “She had it for a while and I played on it as well.”

The 66-year-old continued, “First of all, there is nothing more fun than swinging around a pole. I tried it, and it was the hardest thing… to try to get yourself on this pole. There was no sexual connotation to it whatsoever.”

Mark Consuelos’ stripper past is no rumor, says Kelly >>

Goldie Hawn, author of 10 Mindful Minutes, also shared her three secrets for happiness with Anderson Cooper’s audience. The actress first advised starting with mindful breathing, especially by opting for deep breaths during a stressful moment during the day.

Secondly, Goldie Hawn suggests everyone “get a helper’s high.” She explained in part, “Acts of kindness raise our own optimism, making us happier. Dopamine levels rise in our brains and activate the brain’s pleasure centers, so it’s a win-win situation”

Finally, get on the pole! Or, as she more broadly put it, do some “physical activity.” Touting the benefits of getting moving in any form, Goldie Hawn advised:

“Number one reason why physical activity is important is that it helps grow the brain and helps improve learning. Physical activity changes the chemicals in the body that support a happy brain, most importantly by releasing natural endorphins. There are physiological changes in the brain and body that support happiness. When we exercise, we increase blood flow and oxygen to the brain. And of course, it makes your body healthier.”

At the end of the day, we can’t deny that both Kate Hudson and Goldie Hawn seem to be very happy people!