Viola Davis’ rise to fame was long, arduous, sometimes dangerous and at least once topless! The Oscar-nominated actress revealed to Ellen DeGeneres how it all went down long ago. 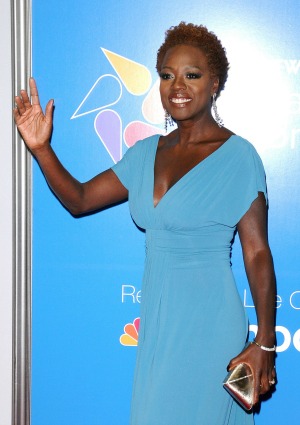 Before Viola Davis was an Oscar-nominated star, she was an actress trying to make a name for herself in any way possible. From singing opera on a basketball court to playing a prostitute in a one-woman show, this 47-year-old has a wealth of stories to share.

Appearing on The Ellen DeGeneres Show Monday, Viola Davis said of the time she sang mid-court:

“I played an opera singer in a one-woman show and I couldn’t carry a tune, and I sang 14 songs.

“One of the places I performed was in the middle of a basketball court and they did not stop playing basketball and they brought their dogs with them and one dog… jumped on me and attacked me in the middle of my aria and I thought to myself, ‘You know what, I think maybe I should choose another career path!'”

That wasn’t the only one-woman show the star of The Help took on, however. Appearing as prostitute in another solo endeavor, Viola Davis dared to go bare, though the audience ended up being less than appreciative of her bravery.

Speaking to Ellen, Viola Davis continued, “I exposed my tatas… and I was about 30 pounds heavier than I am now, but I thought I was hot stuff. And a man in the front row… [said], ‘Oh my God…’ and it wasn’t an ‘Oh my God… they’re the most beautiful breasts I’ve ever seen,’ but, ‘Oh my God, this is so offensive.'”

Viola Davis can next be seen, presumably fully clothed, in Won’t Back Down, due in theaters Friday!