The couple, married for 10 years, welcome their second child into the world. According to Gellar’s rep, both mother and baby are doing great. 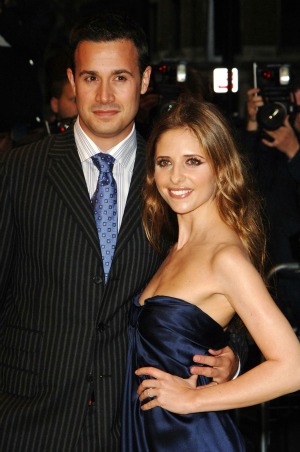 “Sarah Michelle and Freddie Prinze Jr. are thrilled to announce that they welcomed a baby son into the world this past week,” Gellar’s rep told Access Hollywood. “Mother and baby are doing great.”

Gellar and Prinze have been married since 2002 and had their first baby, Charlotte Grace, in 2009.

“Charlotte is very excited to be a big sister,” the rep said.

The two actors met 15 years ago on the set of I Know What You Did Last Summer. The two also starred in Scooby Doo and its sequel together.

Back in April, when they announced the pregnancy, a friend talked to Access Hollywood about how excited the parents were for their new baby:

“They love their little girl more than anything in the world and know that love will only multiply. She is such a fantastic mom; it is just great news.”

When Charlotte Grace was born, Gellar talked to People about waiting seven years after marriage to have a baby. And then she felt like once they did have their first baby, there was one question her friends kept asking:

“The minute you have a baby, everyone asks, ‘When are you going to have another one?'”

Gellar has ventured into the world of voice acting in cartoons in the last few years, playing numerous parts on The Simpsons, American Dad! and Robot Chicken. She also stars in the TV series Ringer, which started in 2011. Prinze is the son of famed comedian Freddie Prinze. He has also made appearances on Robot Chicken and done voices for a few other shows and video games. In 2010, he made multiple appearances on 24.