Kerri Walsh Jennings, one half of the gold medal–winning Olympic beach volleyball team, found out soon after the Olympics she was having a baby. But she said deep down, she knew it while she was there. 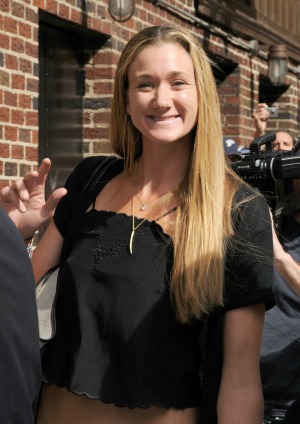 One of the most exciting moments at the London Games this year was the gold medal game in women’s beach volleyball. Two American teams made that final game, so they knew the United States would take home both gold and silver in the event.

The winning team ended up being the veterans, Kerri Walsh Jennings and Misty May-Treanor. Jennings came out today to not only announce her pregnancy but also to admit that she was already pregnant when she played in that gold medal match.

“When I was throwing my body around fearlessly and going for gold for our country, I was pregnant,” she told Matt Lauer this morning on The Today Show. “And today I’m 11 weeks pregnant and feeling pregnant.”

Jennings, who was already a mom before the games, and her husband decided to have another baby, but she didn’t know it would happen so soon.

“I just felt like it would take me a while this time to get pregnant,” she told Lauer.

But then she soon missed her period and was “unreasonably moody,” said the Huffington Post.

Ironically, Jennings’ teammate retired after the games, saying she was doing so because she would like to have children.

“Beach volleyball’s not going to be my career anymore,” said May-Treanor to the Huffington Post. “It’s time for me to be a wife. I want to be a mom and share time with my family.”

Jennings already has 3-year-old and 2-year-old sons, so the new baby will make three. She has said that she would like to go back and compete in the next Olympics in four years. But for those games, it looks like she will have to find a new partner.