For fans who wish they could attend Hollywood’s biggest night, The Academy of Motion Picture Arts and Sciences is offering a chance to win one of 700 bleacher seats on Oscar night. 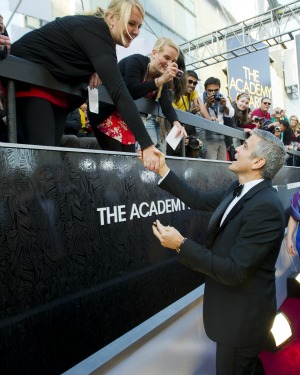 If you thought the Emmys red carpet was glamorous last night, how about experiencing the red carpet on Hollywood’s biggest night, the Academy Awards®? Beginning today, The Academy of Motion Picture Arts and Sciences has opened the official lottery for those famous bleacher seats along the red carpet. The Oscar® Fan Experience is the ultimate event for movie buffs, as winners get to sit along the 500-foot-long red carpet and watch the celebrities walk in their full formal regalia.

While only 700 seats are available to the fans, this is an incredible opportunity to see A-list celebrities like George Clooney and Angelina Jolie walk the red carpet. The seats are so highly coveted that The Academy has had up to 20,000 film fanatics enter the drawing in previous years.

To enter the lottery, fans must head over to The Academy’s website to fill out the entry form beginning Sept. 24 , 2012. The opportunity to enter officially ends at 8 p.m. EST/5 p.m. PST on Nov. 16, 2012, and the winners will be notified after the random drawing. Those lucky winners must provide further information for security clearance. Of course, The Academy is not providing transportation or hotel accommodations—it is up to the winners to get themselves to Los Angeles.

Besides viewing all of the hottest stars up close and personal, the winners will also have the opportunity to watch the Academy Awards at a theater nearby. Plus they’ll receive a fan gift bag!

The 85th Annual Academy Awards will take place on Sunday, Feb. 24, 2013, at the newly renamed Dolby™ Theatre in Hollywood, California. The show will be broadcast on the ABC Television Network live in over 225 countries around the world.