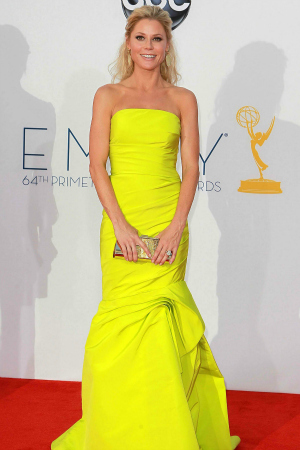 Perhaps we missed the Post-it — er, memo — deeming neon yellow the hippest new hue. Among the sea of classic metallics, jewel tones and neutrals, the leading ladies sporting DayGlo yellow gowns stood out like Lindsay Lohan in a line-up. So was wearing the color worth the extra attention it commanded? Meh… it may be a matter of taste, but we think the results were mixed.

While looking at Julie Bowen’s dress is a bit like staring at the sun, not even the atomic color can eclipse the actress’s true beauty. We think the Modern Family star — who thanked her sexy co-star Sofia Vergara for giving her the guts to wear a curvy, fishtail frock — nailed chic, modern style on the head with her chartreuse Monique Lhuillier ensemble. And hey, it complemented her Emmy for Outstanding Supporting Actress in a Comedy pretty well.

Emmys best-dressed: Who brought it on the red carpet? >> 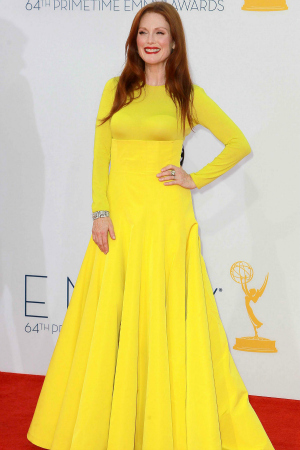 A brilliant actress she may be, but Julianne Moore’s canary yellow Dior Couture gown was, well, for the birds. From the neck up, there’s no doubt the redhead looked as stunning as ever. Things got sticky south of the clavicle, however. It’s one thing to wear a neon shade in moderation, but Julianne appears as though she was hosed down with a highlighter! What’s with all the fabric, Jules? Unless you secretly covered your entire body in tattoos and are trying to keep them under wraps, show a little skin, girlfriend! You’ve got the goods to back it up. 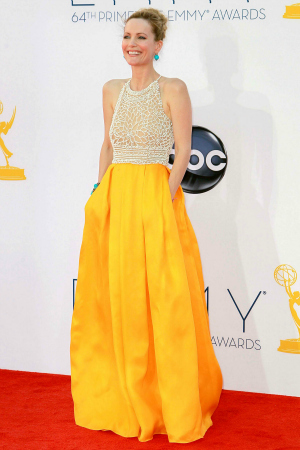 For the record, let it be said that we adore Leslie Mann. She’s funny, she’s gorgeous, she’s smart… none of which you can really tell by taking a peek at her in this getup (except maybe the funny part?). While we applaud her for doing something different, we can’t quite reconcile ourselves to the schizophrenic style of this dress. The skin-tight, Swarovski-spiderweb of a top looks as though it’s being devoured by what appear to be draperies decking out Leslie’s bottom half. Head to toe, it looks like something from a production of Disney’s Beauty & the Beast on Ice gone horribly awry.

Worst-dressed at the Emmys: What were they thinking? >> 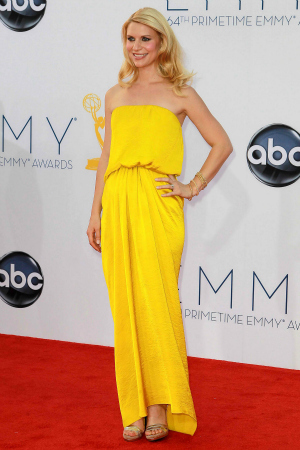 A preggers Claire Danes beautifully draped her bump in a flowy Lanvin number. Was it the sunny yellow or simply hormones that had the actress glowing? Or, wait, maybe it had a little something to do with taking home the Emmy for Outstanding Lead Actress in a Drama Series for her role on HBO’s Homeland! Any way you look at it, this girl’s got game… we’re so glad she bounced back from that whole Mary-Louise Parker/Billy Crudup crud a few years back. Scandal-free looks good on her! 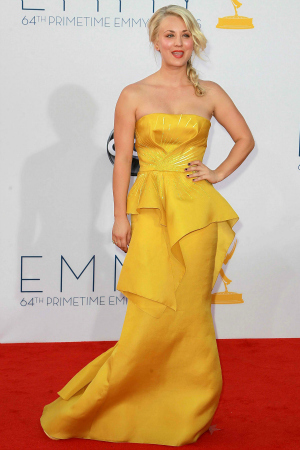 While not completely catastrophic, the mustard-colored dress worn by The Big Bang Theory’s Kaley Cuoco didn’t exactly do the actress any favors. Unfortunately, finding a flattering shade of yellow is a war fair-skinned blonde women wage daily — and this particular battle between Kaley and the color goes to the color. Instead of being the beaming babe she is, she’s all washed out.

Who’s your mummy? It’s a wrap for Emmys night >>