Gauze (or tulle, if you prefer) isn’t just for weddings and archways anymore. Last night at the Emmys, the fabric of choice was sheer, see-through, and at times, confusing. In some instances this flowing fabric rocked; at others it flopped. Here are the red carpet gauze winners and non-winners… 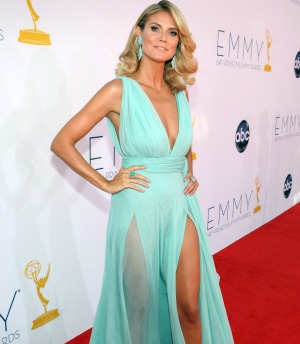 Heidi Klum looked like the million bucks she receives every time she models. We searched for the most unflattering picture of her we could find, to make ourselves feel better, and this is the best we could do. She looks stunning from head to toe, and the tulle on the skirt of this killer gown shifted and swayed in such a way as to reveal Heidi’s glam gams. When you look this good, it’s not the best time for your bodyguard/boyfriend to take the night off. Our only concern with this gorgeous ensemble is her plunging neckline is in direct conflict with the gown’s revealing slits, but it’s our guess that most guys aren’t complaining. Don’t hate her because she’s beautiful? Too late. 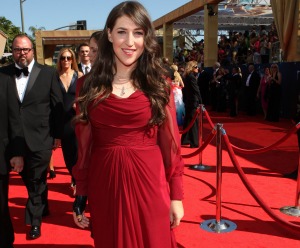 On the other extreme of our gauze gauge, we find Mayim. It’s hard to believe that a neuroscientist wouldn’t know that wearing red on the red carpet isn’t always the best choice. Bialik is almost as widely known for her vocal advocacy of “attachment parenting” as she is for her role on The Big Bang Theory. Several of the principles of attachment parenting allow for kids to decide when they stop nursing, when they are ready for school, and in this case, perhaps what Mommy wears to an awards show. That’s really the only explanation we can come up with for this matronly gown with gauze-like sleeves. But, that’s just our theory.* 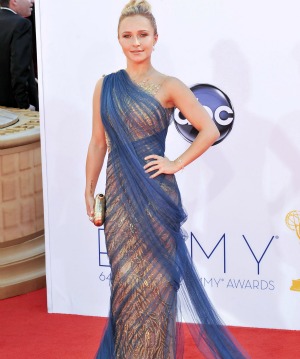 This petite pretty is adorable, but this get-up has us wondering if Hayden‘s stint on Nashville has gone to her head. The blue gauze draped in every direction could have been flattering and dramatic, but on such a small frame and flowing in every direction, it’s just distracting. In fact, it sort of makes us want to unravel the mess, so we can reveal what appears to be a gold and glittery hit underneath. This is what happens when you get greedy by taking a beautiful gown and try to church it up with a wad of tulle. This Grand Ole Opry reject proves that what happens in Nashville… should stay in Nashville. 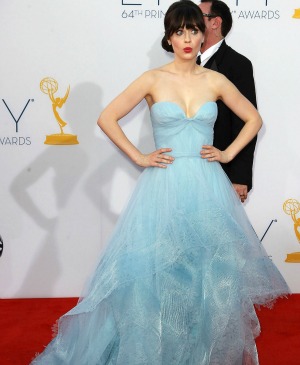 We heart us some Zooey. She is quite possibly one of the most unique, quirky, funny “New Girls” to hit the red carpet in some time. That said, there is just something about this overall look that makes us think Zooey should be having her picture taken with little kids at Disneyland. We can’t decide if the look on her face is because she is also underwhelmed by her gown, or if it’s just her trademark smart-a** look of indifference. There’s nothing really wrong with Zooey’s tulle-heavy skirt – it’s just that the fairy-tale princess look is a contradiction to the actresses’ edgy persona. We’re not suggesting she should have wrapped herself in leather and whips and chains, but maybe a middle ground between sassy and classy may have been more fitting. 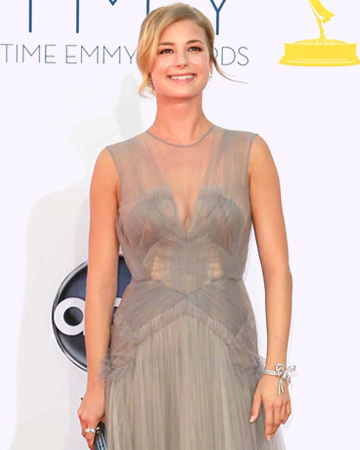 Like Hayden Panettiere, Emily VanCamp is darling. Which is why this gray glop just doesn’t seem to suit her. OK, gray glop is a little harsh, but this much tulle just lends this otherwise lovely gown a granny look. It just says, “Mother of the bride,” much more than “young glowing actress with killer body.” Are you with us on this? Are we completely off base? Is it just the drab color that makes her look more like a rain cloud than the ray of sunshine that she is? 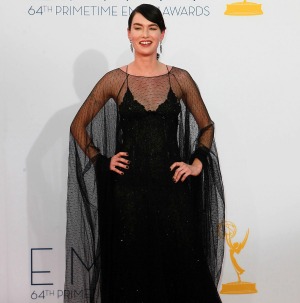 If Morticia Addams was banging around the house in her negligee and then decided to cover up to head to the grocery store, this is what you would get. Again, the dress underneath has vast potential, but it’s gunked up with all this black draping. From the neck up Lena’s hair, skin and makeup are flawless, but this gown is a fright. The back, which shows off Lena’s tattoos, was the best vantage point of this costume. Unfortunately, you can’t go down the red carpet backward. Here’s hoping Lena fires Cousin Itt as her stylist so her next red carpet appearance will be a bit less goth.

* Mayim Bialik wore a Jane Basch diamonds by the yard chain to the 64th Annual Primetime Emmy awards at the Nokia theatre in Los Angeles last night. Mayim was nominated for her first Emmy for her comedic supporting role on The Big Bang Theory, the CBS hit which was nominated for outstanding comedy for the second time.

This necklace can be viewed at: www.janebasch.com and the price is available upon request.