On tour in France and in the midst of promoting her new perfume, Lady Gaga used some radio time this morning to support gay marriage and offer her views of Pope Benedict XVI’s irrelevancy. 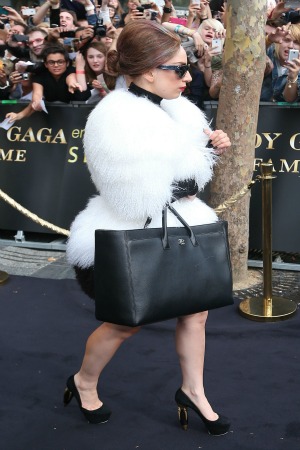 In an interview broadcast this morning on Europe 1, Lady Gaga, usually quiet and demure, had a few things to get off her chest.

In France to promote her self-titled perfume, Lady Gaga Fame, and perform at the Stade de France (where, at 26, she is the youngest star to appear there), Lady Gaga chatted with interviewer Nikos Aliagas during a morning news program.

In painfully stilted and slow English, presumably to allow the simultaneous translator to keep up with her, the “Born This Way” singer said, “I think that gay marriage is going to happen. It must. We are not actually equal — humanity — if we are not allowed to freely love one another.”

She went on to give her views of Benedict XVI, saying, “What the Pope thinks of being gay does not matter to the world. It matters to the people who like the Pope and follow the Pope. … It is not a reflection of all religious people.”

However, the provocatrice expressed her enthusiasm for a measure that would make gay marriage legal in France, potentially designating it the ninth European country to legalize gay marriage by 2013. In rather shaky French, Lady Gaga seemed to utter, “Vive la France, vive la libération, vive l’égalité,” to express her support for the proposed legislation.

She ended the interview by expressing again her support of homosexuals and their right to have children. No mention was made of the pounds she’s reportedly packed on, though French reviewers of her Saturday Stade de France appearance noted that she seemed far from chubby.