With a performance logging in at 40 minutes, Kanye West has another sex tape on the loose. As if that weren’t vexing enough for GF Kim Kardashian, West tells her that she must lose weight. 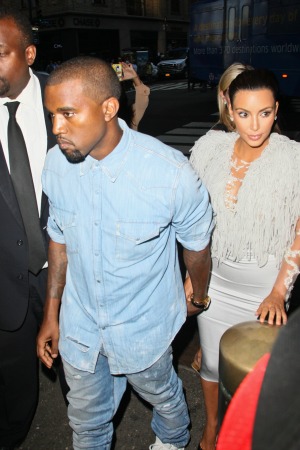 Kanye West has another sex tape on the loose. This one, as with the first one, is reportedly being offered to media outlets by a third party, according to TMZ.com. Kanye supposedly has no idea how the videos were taken from his computer and threatens legal action if they are released.

The two tapes are apparently similar, featuring Kanye in action with a young woman in a hotel room. But the second version is the extended play version — the first clocked in at about 20 minutes, but the new one has the guy in “constant action” for 40 minutes, inspiring one viewer to comment that his performance is “almost Sting-like.”

As if this latest news might (or might not) be vexing enough for West’s girlfriend, Kim Kardashian, West also is telling Kardashian to lose weight, according to OK! magazine. He suggests the lemon juice-cayenne pepper-maple syrup diet that helped Beyoncé lose weight for her Dreamgirls role.

“He says he wants her to be the face of his clothing line … but to do that she has to fit into the clothes,” a source told the magazine. “It’s really unbelievable – her shape is what made her name. He has a long-term fantasy of turning them into the Beyoncé and Jay-Z power couple, but getting Kim to starve isn’t the way to do it.”