Apparently Angelina Jolie started a trend with her 2012 Oscars look: Everyone from Heidi Klum to Giuliana Rancic rocked the high slits on the red carpet. 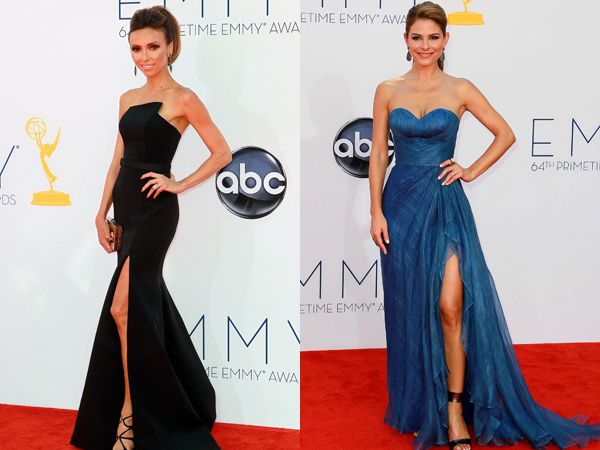 We saw quite a trends on the red carpet at the 2012 Primetime Emmys on Sunday night: Lots of yellow, cleavage… and plenty of leg! Stars ranging from E!’s Giuliana Rancic to Heidi Klum let their long, lean legs come out to play.

Who do we have to blame for this trend? Angelina Jolie, of course! The actress captured the world’s attention when she showed off her leg at the 2012 Academy Awards, so it only makes sense that other celebs would copy.

Klum gets our pick for best slit, though. The newly single model wore a seafoam-colored gown by Alexandre Vauthier.

“We are always excited to work with a new and talented designer,” her stylist told AOL. “We recently started working with Alexandre Vauthier and when he showed us his collection, Heidi immediately fell in love with the color and the translucent, airy feel of the dress.”

The problem? It was completely sheer when they got it! Klum isn’t afraid of being nude, but it’s best if it’s not on the red carpet.

“It was completely sheer, so we had the designer add lining, but then the lining made the dress feel too bulky and it lost its cool and airy feel, so we had to think and made it work!” her stylist continued. 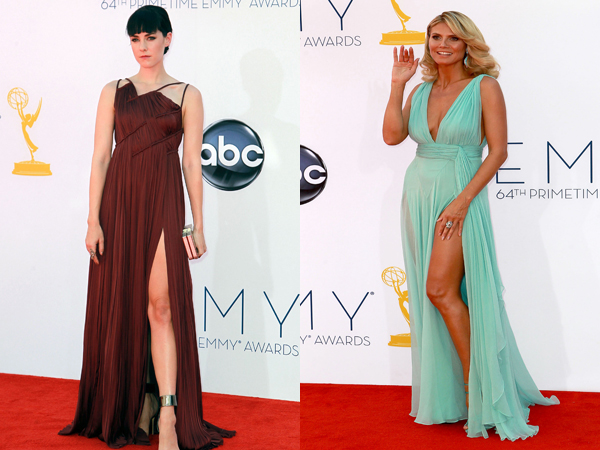 E! Fashion Police host Giuliana Rancic made her first outing since becoming a mom on the Emmys red carpet. The reality star wore a couple of different dresses during her duties Sunday night, but we especially loved her black Romona Keveza gown that showed off her taut thighs.

Even Jon Cryer is surprised at his Emmy win >>

EXTRA! host Maria Menounos also looked pretty in her Oliver Tolentino-designed gown. The former Dancing with the Stars contestant opted to crowdsource her gown pick by asking viewers to vote on their favorite. We think her fans picked well, don’t you?

Why so serious, Jena Malone? The Catching Fire actress looked gorgeous — if not a little stoic — in her wine-colored gown from J. Mendel. Her body looked amazing in the dress, mostly because of her rigorous training schedule for the second movie from The Hunger Games trilogy.

“Oh yeah, I’m in the thick of (training) but excited,” she told MTV News of her workouts. “I love that kind of stuff. Sucker Punch kind of got me into a regimen and now I kind of crave it.”