The Emmys host promised us a prank, and a prank he gave us… we think. It isn’t clear exactly which part of the show that might have been. 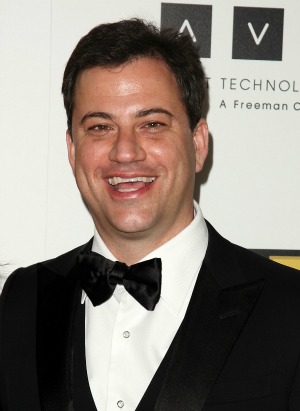 Host Jimmy Kimmel announced that people needed to tune in to The Emmys because he would be pulling off a one-of-a-kind prank. But it was a little confusing what that prank actually was.

The first possibility was an attempt to get more people to watch by sending out mass messages on Twitter.

“Oh my God – Tracy Morgan just passed out onstage at the Emmys – turn ABC on NOW!” he told everyone to tweet, all at once (although he did say they should use “OMG” instead so young people would listen).

Hayden Panettiere and Connie Britton were on stage to present and looked genuinely worried, but once the audience laughed, they seemed to understand it was just a joke. Tracy Morgan lay on the stage for a while until “paramedics” came to take him away.

Another possibility for the prank is the “In Memoriam” section. When it came up, singer Josh Groban appeared on the stage behind a piano and started singing as the video started playing. But when that happened, the first name to appear was none other than Jimmy Kimmel. Then every name after that was also Jimmy Kimmel, with different pictures of the talk show host.

At the end, he said, “Sorry Matt Damon, we ran out of time.”

For those who really did die this last year, we can only hope that they have another “In Memoriam” and did not just turn the tribute into a joke.

Kimmel did not announce either event as the prank that he’d planned, so it could be either one. It could also be something he did that we just didn’t notice, since the night has been rather random thanks to Kimmel. But either way, let the Twitter-verse know that Tracy Morgan is okay, and so are Jimmy Kimmel and Matt Damon.

30 mins ago
by Scarlett Harris