Jon Cryer picked up his second Emmy for Two and a Half Men on Sunday night, though it was his first for Lead Actor. 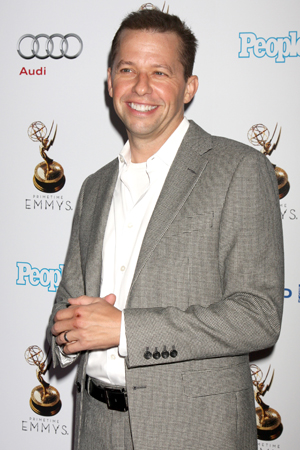 Jon Cryer is now pretty happy that Charlie Sheen has his meltdown last year: It paved the way for his Emmy win for Best Lead Actor in a Comedy Series for Two and a Half Men.

Cryer looked completely surprised when he won the award over favorites like Louis C.K. and Alec Baldwin.

“This is crazy,” Cryer said while accepting the award.

“It’s an amazing feeling. You never get used to it,” Cryer told Entertainment Tonight last week. “I love just being a member of the Television Academy. I grew up on television and always loved it. I can’t believe that I’ll go there… To be honored by this group with a nomination is amazing.”

Emmy winners of the past: Where are they now? >>

The win is a welcome change for the actor, given that he thought he was going to die this time last weekend. Cryer is also an endurance athlete and was competing in the Nautica Malibu Triathlon when he crashed during the cycling portion.

“You know how cyclists wear the leotard that offers zero protection? I used that to break my fall,” he told TMZ of the spill that roughed up the left side of his body.

Emmy night: You decide who wins the SheKnows awards! >>

“I’ve left a lot of my skin on the Pacific Coast Highway,” he added, nothing that he’s lucky he came away with just a few scrapes and no broken bones.

His biggest thought during the crash? “Not the face!” he joked to TMZ.

We’re sure an Emmy is going to go a long way in helping heal those wounds.

Do you think Jon Cryer deserved to win the Lead Actor Emmy?