Amy Poehler has been nominated for seven Primetime Emmys in the last five years but has yet to win one. Tonight should have been her night. 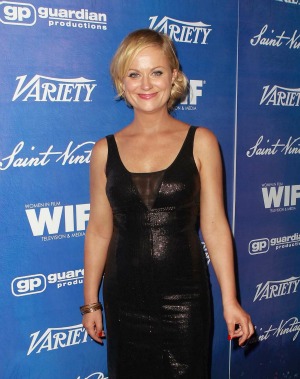 This year, we thought it would be different. Poehler was also nominated for Outstanding Writing for a Comedy Series, so it looked like she might have a chance. But it was not meant to be. Louis C.K., another actor who also writes for his show, won the award for Louie. When the camera showed Poehler’s face after C.K.’s win, she looked like she might be hiding disappointment — but of course she was a gracious loser.

Poehler was also up for Best Actress in a Comedy Series this year. When Stephen Colbert introduced the nominees, he said that five of the seven nominees are just great. “And the other two… well, I’m out of time.”

Julia Louis-Dreyfus took home the award for Veep, her third Emmy Award. Louis-Dreyfus has had a long comedic history, starting her career on Saturday Night Live. Colbert introduced her as “one of the nice ones.”

When Louis-Dreyfus got up on stage, she started by thanking “her children” but realized she had Poehler’s thank-you list. Poehler promptly ran up and gave her the “right” list. So, if nothing else, it looks like the SNL alums can at least keep the awards comedic.

At the end, Louis-Dreyfus read from her note: “Lastly, isn’t it a shame that Amy Poehler didn’t win?”