Eric Stonestreet picked up his first Emmy, but we’re more interested in his rumored relationship with Charlize Theron. 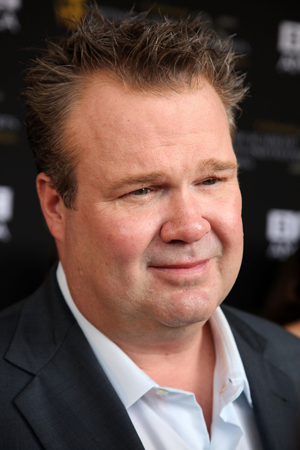 Eric Stonestreet bested his Modern Family co-stars Ty Burrell, Jesse Tyler Ferguson and Ed O’Neill to pick up the Emmy for Best Supporting Actor in a Comedy Series. The gracious Kansas City native thanked his co-nominees after the win.

The best moment? He thanked all of his gay fans for sending him shirtless pictures.

PBS is especially excited about the Emmys this year >>

Stonestreet, of course, only plays a gay man on television. He’s all about the ladies in his personal life, but contrary to rumors, he’s not dating actress Charlize Theron.

“Charlize and Eric get along incredibly well. They started off as friends but things are blossoming between them,” a source told the Daily Mail. “Eric is down to earth and funny and Charlize thinks the world of him. It’s early days but they’re very fond of each other.”

However, Stonestreet would like you to know that’s definitely not the case.

“I wish people would stop spreading rumors that Charlize Theron and I are dating. It’s starting to make Halle Berry jealous,” he tweeted on Sunday morning.

The man better known as Cam is single and ready to mingle, though. He recently broke it off with his longtime girlfriend Katherine Tokarz.

“I’ve never been recognizable like this and single at the same time,” he told People earlier this month. “But it’s definitely fun.”

So, who is he taking to the Emmys? His best pal, Paul.

Today I’m taking my best friend Paul to the Emmys. He dared me to audition for the first play I ever did at #kstate. #emmys,” he tweeted.

As for Eric and Charlize? Think about it, you two! It could definitely work.