Surprise! Prince was in the building at the iHeartRadio Music Festival on Saturday night to perform with Mary J. Blige. 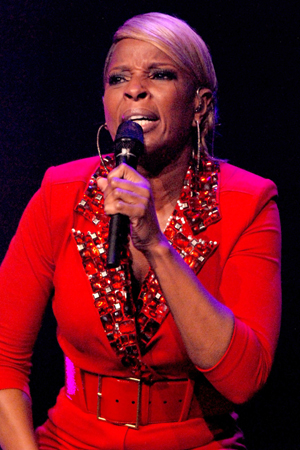 As if the star power on night two of the iHeartRadio Music Festival wasn’t bright enough, performer Mary J. Blige surprised fans during her set with a special guest.

“I got a real good friend in the building. He’s one of the most amazing artists to ever walk the earth,” she said as she introduced the man known as Prince.

Prince — decked out in ’70s garb — rocked out to Blige’s performance of Chaka Khan’s “Sweet Thing” before doing a duet on “Come 2 My House.”

“I know you have to be very particular about who you be messing with,” she told Prince before they launched into the song. “Sing with me tonight!”

It was pretty incredible. However, Prince isn’t the only surprise guest at the Festival. Pink surprised fans by stepping out during No Doubt’s set on Friday night to perform — and sneak in a kiss with Gwen Stefani. The “Blow Me (One Last Kiss)” singer did a duet with the fellow bleach blonde on “Just a Girl.”

“I just got off stage from the raddest surprise performance with No Doubt. She really is that cool. #imjustagirl,” Pink tweeted after the performance.

Just goes to show that you’re never really sure what’s going to happen at the iHeartRadio Music Festival!