With all the extracurricular activities available for kids today, it can be hard to decide where to spend your time and money. However, the links between music lessons and intelligence might help you make up your mind. 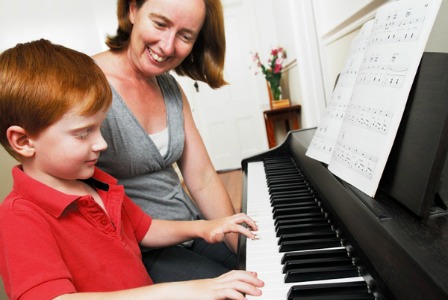 If you’re debating whether or not to sign up for piano lessons, you might be swayed by the multiple studies showing a correlation between music lessons and intelligence.

You’ve probably heard that listening to classical music will enhance your child’s intelligence. This common misperception has its roots in a 1993 study conducted among 36 college students. The study showed that those who listened to a Mozart song subsequently performed better on spatial reasoning tests than those who listened to a monotone voice or silence. The media picked up the research and ran with it, proclaiming “Mozart makes you smart!” The governor of Georgia even proposed a budget that would gift every newborn in the state with a Mozart CD! There’s just one little detail of the study that was overlooked in all the hoopla — the brain-boosting effect of the Mozart song wore off after 10 or 15 minutes.

While simply listening to classical music may not have a long-lasting effect on IQ, subsequent research has shown that studying and playing music can actually change the brain for the better. In a study unambiguously titled “Music Lessons Enhance IQ,” a research team led by E. Glenn Schellenberg at the University of Toronto ran an ad in the paper offering free music (voice or keyboard) or drama lessons to 6-year olds. Lessons were taught for 36 weeks at the prestigious Royal Conservatory of Music (six classes with six children per class). The IQs of these children, as well as a control group who received no lessons, were tested the summer before the lessons and the summer after. In all groups, IQs increased, as was expected after the kids completed their 1st grade year in school. The notable difference was that the children who received music lessons had an average IQ increase of 7 points, while the control groups had an average increase of 4.3 points — a statistically significant difference. Interestingly, the kids in the drama classes experienced an improvement in social behavior that was not seen in the music groups.

Positive impact on reading and math

According to a study published in the 2009 Social Science Quarterly,  kids who took music lessons and attended concerts with their parents showed a higher achievement in reading and math. The study, conducted by Darby E. Southgate, MA, and Vincent Roscigno, Ph.D., of The Ohio State University, was based on a review of national data that analyzed music involvement and math and reading performance for elementary school and high school students.

So it seems music lessons help kids with IQ and academic performance in the short term — but what about long-term effects? More good news! In 2011, researchers from the Landon Center on Aging, Department of Psychiatry and Behavioral Sciences, University of Kansas Medical Center found that a high level of musical activity through life led to “preserved cognitive functioning” in old age. So if you already feel like your mind could use a little sharpening (Mommy Brain, anyone?) you might want to incorporate more musical involvement into your life too!

More on kids and music

10 Pop songs little kids can dance to
10 Pop songs for kids that don’t involve sex, drugs or Lady Gaga
These songs always get my kids to simmer down in the car

Set aside a designated time for your child to practice piano. Make sure there are no distractions such as loud television or interruptions from siblings. Quality practice will help your child progress.