The two X Factor hosts seem to be learning a lot from each other, including how to dress and where to get your hair done. 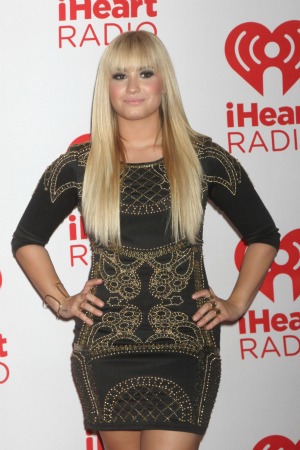 The iHeartRadio Music Festival has brought out more than the fans and performers — it turns out that quite a few presenters and other celebrities are in attendance too. Two of those celebrities are Britney Spears and Demi Lovato, and it seems they may be rubbing off on each other.

Spears appeared on the red carpet with her usual blonde hair, but with green, blue and pink strands too, and a short black dress. And Lovato showed up with straight blonde hair, having gotten rid of her colorful locks. She was also wearing a classic black dress with a gold design. At least for the hair, the two seem to have completely switched looks or at least taken notes from each other.

Both were backstage after presenting and chatted with American Idol host Ryan Seacrest. Seacrest also works for Clear Channel Communications, the company that owns iHeartRadio and is putting on the festival.

Spears and Lovato are 10 years apart, but they may have more in common than we all knew. Both were in the industry at very young ages, Spears as a Mouseketeer and Lovato on Barney. The two singers are both judges on the new season of The X Factor along with L.A. Reid and Simon Cowell.

The season just started, but Cowell has shown he is a big fan of both. He thinks it’s important his judges are okay with being honest, even if that means being mean sometimes, and he has said both of them are doing a very good job.

The second night of iHeartRadio is sure to be just as exciting as the first. Many of the performers from Friday may have stuck around and will be at the show. Plus, the list of performers on Saturday night is a stimulating mix of country, rock and pop.